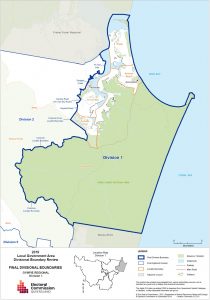 It’s Council Election time on March 28, 2020, and voting is compulsory for citizens over 18.

At the time of print, three Gympie Council candidates have indicated their intention to nominate for the Division One region which has 4905 voters; Cr Mark McDonald, Jess Milne and Phil Feldman.

Nominations for candidates for election as mayors and councillors opened on February 22 and a caretaker period started.

Electors had until 5pm, February 28, 2020 to either update their enrolment to a new name or address or to enrol for the first time.

The Electoral Commission Queensland (ECQ) will conduct a random draw to determine the order in which candidates appear on ballot papers on Wednesday, March 4.

The Change Commission reviewed the local council boundaries in 2019 and recommended the transfer of the Wallu locality and part of Toolara Forest and Tin Can Bay to Division 2 to ensure each division of the Council has a similar number of voters, so that each person’s vote has the same value.

Postal vote applications close at 7pm Monday, March 16 and the ECQ must receive your postal vote no later than 5pm Tuesday, April 7, 2020.

Early voting will be conducted between March 16 and March 27, 2020, at venues to be announced in the Gympie Region.