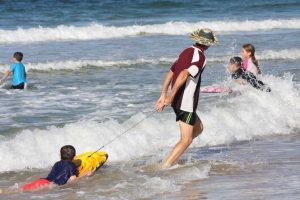 Bush to Beach Kids will be back on the coast the week before the holidays – make sure you say hello!

This month our coast welcomes Bush to Beach Kids on September 17, organised by Tony Stewart and helpers. He has a week, chocka-block full of fun for them – including an ocean swim! There’s a Bush to Beach Sponsor Thank You night – 5.30pm, Thursday September 20 at the Community Hall. All food supplied, bar will be open. Tony encourages everyone who has helped the kids get to the beach, to come along.

Fresh from another trip to the Longreach area with food supplies, the situation in South Western Queensland gets worse by the day.

One farmer said to me, “Those mental health workers are doing nothing for me because help has come two years too late.”

It is a fact, stress is bringing on the big C in cases and I have heard of both partners suffering!

Our Queensland Government gives $1 million to farmers and $4 million to employ more Mental Health workers, it’s a joke. For a $12,000 federal handout, farmers need to fill out 80 pages to receive $6,000 in October and an additional $6,000 next March – if you qualify. I won’t start on politics as many from the bush will know what I mean.

To those that have helped with donations to keep food on the table for destitute families, a BIG thank you. To see the anguish and despair on the faces of some farmers faces picking up food when it was delivered, really hit home.