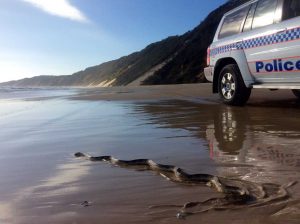 On a recent dawn patrol along the beach I came across this highly venomous Elegant Sea Snake. With a distinctive eel-like tail, it left an interesting pattern in the sand as it slithered back towards the water. The morning sun was warming us both, and I had a philosophical ‘moment’ as I considered the lessons I could learn from this ‘dangerous’ creature…

It occurred to me that there are indeed dangers on the beach – but that the risks can be almost entirely eliminated: in this instance, not touching the sea snake ensured that it wouldn’t bite me. Simple.

Yet simple lessons like this are lost on some…

As I continued down the beach I came across other marks in the sand…the tell-tale markings of a far more dangerous creature: the Aussie bogan in a four wheel drive. Far from endangered, the Aussie bogan is – unfortunately – all too common.

Typically found on Teewah Beach with a ute and a blood-alcohol reading, the Aussie bogan can be distinguished from other beach users by: a lack of consideration for others; a lack of respect for the environment they came to enjoy; and a lack of knowledge when it comes to the consequences of reckless driving.

Every now and then a rare specimen will evolve – shedding his bogan skin and growing into a considerate and productive member of the community – but often this process only comes about following fines, court appearances or education from the likes of you and me.

Alternatively, as we saw on Teewah Beach last month, this process of change may only take place after injury. In the bogan equivalent of picking up a sea snake, a 21-year-old male was recklessly driving in circles on the beach – and he got bitten. In this case the front wheels bit into the sand, and the vehicle rolled numerous times…

This could easily have been fatal for both driver and passenger, but in this case the driver will get the opportunity to learn from his mistake…albeit with a court appearance for Dangerous Operation of a Motor Vehicle.

With plenty of traffic on the beaches this holiday period, I wonder how many people will recognise these types of dangers and look to learn from the mistakes of others…and how many will simply end up bitten as well.

When it comes to snakes, a fatal bite can be avoided by responsible behaviour near the animal – but there is also the ‘second chance’ of survival through anti-venom. There is no such antidote or second chance for a fatal motor vehicle crash.

On behalf of your police at Rainbow Beach and Tin Can Bay, I’d like to wish you all a safe and merry Christmas. We look forward to serving in partnership with you again in 2017.