One of the “hottest young performers” in country music has also become an ambassador for our region, with one of the jewels of the coast showcased in a recent video.

Newcastle singer/songwriter Morgan Evans, was awarded Country Music Channel’s New Oz Artist of the Year. With a number one single and number one video, Morgan has toured with Taylor Swift, Brooks & Dunn, Thirsty Merc, Shannon Noll, to name a few.

When asked why Double Island Point was chosen for the video, he  said the “budget wasn’t massive” and he needed a location. Pete from Coolum’s Epic Films was booked for the shoot and he suggested we come to him.

The video took only two trips up to the Point, “We shot a half day and then a full day. He says it is now “one of my favourite places in the world.”

The lyrics in While We’re Young is all about living in the moment and making the most of the time we have.

Double Island Point is definitely a great place for making memories. The video shows Morgan at Honeymoon Bay, strolling up to the Lighthouse and looking out from the headland. It’s breathtaking.

Seeing Double Island Point on film makes you realise just how special it is. The screen encompasses the Coloured Sands and Carlo Sandblow is clearly visible.

It won’t be long before Morgan is back in the region for the Gympie Music Muster.

He’s no stranger to the iconic event, he said, “The first time was just to go and experience it all.”

“Then I played a few. Last year I was on the Main Stage, but it was early in the day. I’d released the EP on the first day of the Muster and streamed a new song everyday – there were a heaps of people singing it before I even performed that week. While We’re Young was on that very EP.”

When asked if his latest CMC accolade helped secure his prominent time on the main stage for the 2013 performance, he said “Everything helps.” Just coincidentally, “After that weekend the Gympie Muster gig was confirmed.”

He loves the atmosphere of the Muster and the “hard core” dedicated country music fans.

The new single Carry On, he says, is “something different”. While we’re Young is positive and up tempo. “But not every day is Double Island Point.” Carry On is more about sad times and his fans are loving it – it is climbing the CMC charts.

When we talked, Morgan was preparing to leave for Nashville, USA, to record his first full length album. It’s an exciting time for him – the success has been after years of hard work in an industry that is difficult to crack. “I turn 28 tomorrow and had my first professional gig at 13.”

He already has a huge amount of support from Muster regulars. Make sure you check out While We’re Young and after you’ve seen the headland, stay and listen to Carry On – they are also linked on our facebook page.

Morgan remembers a trip to Fraser Island as a kid. He says he wants to spend more time here, and suggested he stay at Rainbow Beach after the Muster. Surfers, travellers and locals will agree  – it is definitely a destination worth stopping for. 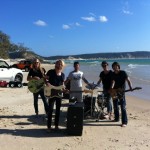 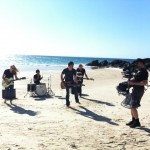 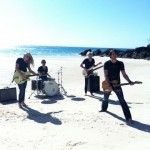