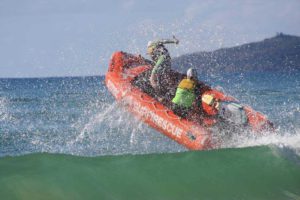 Make sure you are there for all the IRB action, June 2 and 3 at Rainbow Beach

After May competitions at Alexandra Headland and two in Coolangatta, Rainbow Beach Surf Club will host the Inflatable Rescue Boat (IRB) Carnival over the weekend of June 2 and 3.

Aside from the spills and thrills of the competition, the event is a real reinforcement of lifesaving skills. The races are all about simulating rescue situations and testing the abilities of drivers and crew people as they’re transferred to a competitive setting.

Ocean Roar is the dedicated IRB competition series which features five rounds of competition throughout the season with each round attracting on average, 280 competitors.

The competition works on a cumulative point-based system with the winning team awarded the Premiership Title at the end of the series.

“It is very exciting and our young members love it, so the IRB Carnival is something, in the long term, we’d like to compete in, as a ‘foot-in’ to get our surf sports up and running again.”

Tracey Hethorn is organising catering across the two days. If you can help out, please contact the Surf Club on 5486 3249.

Clubs around the state continue to fight it out for surf rescue supremacy, with Ocean Roar Round 5: June 9 at Kirra and the Queensland IRB Championships, the pinnacle event of the season, on June 22-24 in Kurrawa.

Wishing all the competitors a wonderful weekend in Rainbow Beach.