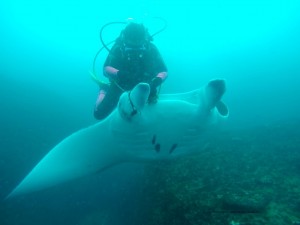 What a fantastic month of diving so far. We have enjoyed some beautiful weather conditions, and with such hot days everyone has been getting in the water.

Wolf Rock has not disappointed, turning on a variety of marine life second to none. The female grey nurse sharks are here in huge numbers for the beginning of their gestation period and we have schools of baitfish being chased by the trevally, kingfish and bonito that are in turn being chased by the whaler sharks! And then we have the leopard sharks, groper, bull rays, eagle rays, turtles…too many to list.

On a much sadder note we came across a manta ray that had become entangled in a rope line used for a marker. It had been taking advantage of the slight current at Wolf Rock for a rest.

This was such a heartbreaking sight as manta rays are one of the most graceful and gentle creatures you can see under the water. His cephalic lobe was about 50 percent severed due to the weight of the piece of coffee rock used to hold the marker in position.

At the other end of the line was a small styrofoam float. In his attempt to free himself of the line it instead wound around and around like a tourniquet and was so tight it was impossible to remove. Fortunately we were able to cut off the coffee rock and float which I’m sure gave the ray some relief.

We have been in touch with Asia Armstrong who manages the not-for-profit organisation Project Manta, and they have identified him as “Grumpy Dave” a manta ray last seen in a very healthy state at Lady Elliott Island in September 2011. Asia is confident that even though he will probably lose that lobe he will be able to survive as long as infection does not set in.