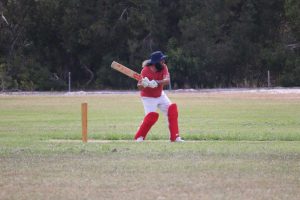 The Rainbow Beach Cricket club have officially finished the regular season of the Gympie Reserve Grade competition. Rainbow Beach have finished in a solid second position moving into the well anticipated finals series, only a few points behind Wests Cricket Club.

Rainbow Beach led the 15 round competition for 13 rounds, before a loss to Wests in round 14 meant that Rainbow Beach would have to settle as regular season runner ups. Round 14 was the biggest game of the season for both clubs and the Rainbow boys travelled into Gympie to meet the boys in green.

Rainbow’s captain, Merv O’Neill, won the toss and decided to bat first. Rainbow Beach struggled early losing four wickets for hardly any runs before Deano Long came to the crease and made 35 off 29 delivers.

However, terrific bowling from Wests player Sarge Malek (6-26), sealed Rainbow’s fate as they were ultimately bowled out 115. Wests then chased this total down winning by eight wickets.

For anyone wishing to get involved in the club for next season contact Merv at mervoneill@hotmail.com. The finals will take place early this month on March 9.