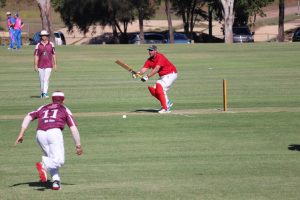 Matto Conaghan was recognised for his fielding at the Grand Final

After Rainbow Beach Cricket Club finishes the regular season in a solid second position only a few points behind Wests, hopes of becoming reserve grade champions were high. Rainbow’s first finals clash saw them take on Wests for an automatic place in the grand final.

The team made the trip into Gympie and prepared themselves for a tough battle against the boys in Green. Captain Merv O’neill lost the toss and Rainbow Beach were sent out to bat first.

On a tough wicket Rainbow Beach did well to make 125 runs while losing nine wickets, with Mark Alexander top scoring with 20 of 12 deliveries.

Rainbow Beach then showed incredible passion in the field bowling Wests out for the small total of 82 runs, Mark Alexander took three wickets and won the game for Rainbow Beach sending them into the grand final two weeks later.

Two weeks on and Rainbow Beach are once again traveling into Gympie to play. This time the stakes much higher, the grand final against fourth place finishers Gympie Colts.

The boys travelled into Gympie on the bus with victory thoughts in mind.

Merv O’neill won the toss and Colts would be batting first and with great effort from Matto Conaghan and Nick Lattanzi, taking three wickets respectively, Colts made 125 runs. Rainbow Beach then struggled on a tough wicket and ultimately fell short of the total by as few as 16 runs.

For anyone wishing to get involved for next season, starting in August, please contact Merv at mervoneill@hotmail.com