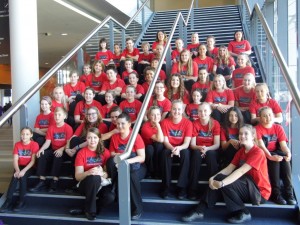 Minister for Education, Training and Employment John Paul Langbroek today congratulated the students and 200 teachers involved in staging four performances on 18 and 19 July in Brisbane.

“The 2014 show was the culmination of eight months of rehearsals and workshops and the result of that effort and commitment was truly spectacular,” Mr Langbroek said.

Mr Langbroek said the event focused on bringing schools together to celebrate excellence while building students’ self-esteem and performance skills.

“Students learn the importance of goal-setting and the value of self-discipline and perseverance, while the teachers involved have their skills extended with formal professional development accreditation they can take back to the classroom,” he said.

Locals were blown away by the show – from superb jazz, marching band, instrumental and spectacular vocals and dances. RBSS travelled down for the Friday matinee and many families watched their children over the weekend.

If you missed it, more than a million viewers are expected to enjoy the production when it is broadcast nationally on Network Ten on 6 December 2014.