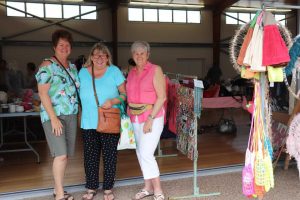 Kim Cozens, Glenda Eckle and Lyn Barrett catch up at the Craft Vintage and Recyclables Fair at the Rainbow Beach Hall

For an end-of-year clean out or stock up, there will be a Craft Vintage and Recyclables Fair in the hall on December 8, book a table at the centre.

The Rainbow Beach school end-of-year concert is on December 11.

Community Centre action sees the return of the Festival of Small Halls on December 12, featuring Aussies Rob Longstaff and Lucy Wise and Canadian Old Man Leudecke – be there for an evening of fine entertainment.

The Community Centre committee met with Gympie Council’s parks team and discussed the forward program that Council has for Rainbow Beach as an exploration of possibilities for partnership. 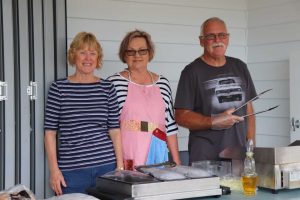 You’ll find a feed on December 8 at the fair, thanks to volunteers like Peggy Phelan, Lynda and David Shaw

Relevant activities are that Council is tendering for a concept design for a town sports oval and will be undertaking related public consultation over the coming months to scope out the project.

Beach access for the mobility impaired is also currently under consideration, and there is an ongoing program in Laurie Hansen and Phil Rogers parks to improve toilet and recreational facilities.

The concept of a bike path from town to Carlo Point was noted and will be considered as part of road improvement in coming years, and a bike path to Inskip Point, whilst recognised as a real benefit, will need significant input from state and federal levels. 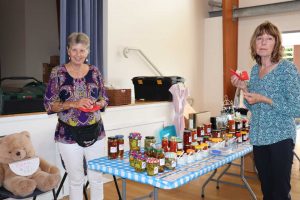 Jam maker extraordinaire, Lexie and her sister Di are at every market and fair, a great idea for a locally made gift for Christmas

A ‘movies in the park’ night is proposed for early in the new year, January 10 or 12 mooted as possible dates. Something to look forward to, confirmation of details in the next issue.