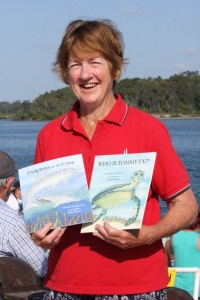 Cooloola Dragon Boat Club have just awarded Life Membership to Norma Sanderson. Tin Can Bay residents will know Norma from community groups that she is involved with – Coast Care; Tin Can Bay Art Group; Sunshine Coast Women’s Adventure Group and the Dolphin Centre Volunteers of which she was a ‘founding member’.

Norma is so passionate about dolphins at Tin Can Bay that she is now writing her sixth story on them, featuring their loyal companions – the birds. Also a dedicated grandma, Norma somehow finds time to share how it all began with Community News.

Norma Sanderson has published five books on her favourites subject, Tin Can Bay dolphins, and with her sixth in production, her writing desk is teeming with stories of dolphins and the beloved companions at the Dolphin Centre  – the birds.

Norma’s personal favourite is “Tommy Tat”, as the book mentions more sea creatures frequenting the bay. “This was not intended as a money making enterprise but an education by way of a simple story.

“The books are only available for purchase at the Dolphin Centre, so it is rather special”, said Norma, who has donated books to school libraries on the coast and Gympie region and given gifts of books to special children.

Norma has had a varied career in banking, administration and finally as a library aide and a teacher’s aide, so it’s no surprise she was inspired to create a wonderful educational resource for The Dolphin Centre.

The series is Norma’s “first attempt” at published works, but writing runs in the family line. “My dad (with no education as such) read a lot and wrote about nature. He published Joe’s Book, a book about the Bunya Mountains back in 1970, which is still available I believe.”

The writing gene dates back to Norma’s grandfather, who was editor of the Mungindi News back in the early 1900s.

Moving from Brisbane to Tin Can Bay in 2004 was a wise move for Norma, having always been an outdoor person and a self-confessed “tomboy”, she didn’t mind wet and dirty feet and fell in love with Tin Can Bay immediately.

“I am passionate about the welfare of the dolphins and as a volunteer I can educate visitors about our pristine habitat and the life cycle of these endangered Australian humpback dolphins*,” said Norma who also plays basketball at World Masters Games, and likes to go out on her kayak to “veg out”.

Fellow “Dragon”, Gayle Barnett said a Life Membership which is the highest of accolades, is well deserved by Norma (the compulsive volunteer) who, since 2004, has served the Dragons in many capacities, both on and off the water.

“Norma has served as Vice President, Equipment Officer, Publicity Officer and Social Events Coordinator. Our club has a strong reputation for enjoying many a social occasion and this is largely due to Norma’s tireless efforts over the years. Norma also helps coordinate activities at the ‘Dragon’s Lair’ on market days, at the RSL hall… a very successful fundraising venture for our club.

“On the water, Norma has been the ever reliable, ‘super’ sweep or helmsperson, (and sometime paddler) both in club competition and in all voluntary community activities with which CDBC has been associated.

“In particular, during our long association (11 years) with the Gympie Special School, in providing a paddling program for their students. I doubt that Norma has missed more than two or three Friday mornings on the water with these wonderful kids.”

“This was the first time that the race category was included, not just in Australia, but in any National Championship event in the world,” said Gayle.

In 2010, Norma brought home a silver and a bronze medal, and gold in 2011! This is a very impressive ‘brag file’… but Gayle said, “you’ll never hear about it from Norma”! 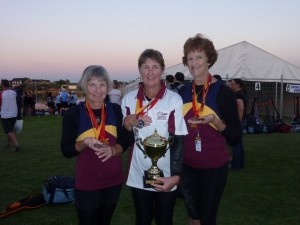 Norma finds time to be a doting grandma for her two sons and four grandchildren who she loves to visit every couple of months in Brisbane and the Gold Coast.

Also an activist, Norma was instrumental in the push to have girls accepted into Nippers back in the 1970s, something we take for granted now.

A local environmental guardian, as a member of Cooloola Coastcare, Norma helps seagrass monitoring, mangrove watching and general weeding of the Tin Can Bay foreshore.

Norma tops off her all-rounder status with her position as secretary of the Cooloola Coast Art Group, which is now involved in hosting an Art and Photography Show, with the next show planned for July 15, 2016.

The sixth book in the Dolphin Series is planned for release at the end of 2016, and will be available from Barnacles Dolphin Centre.

*Please note that all publications up until now refer to the Dolphins as Indo-Pacific Humpbacks. Scientists have done DNA testing over the past few years and found that our Dolphins are unique to Queensland and Papua New Guinea so have renamed them as “Australian Humpbacks.”