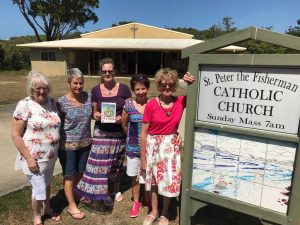 The congregation of St Peter the Fisherman Catholic Church, at Manooka Drive in Rainbow Beach, is coordinating and hosting the World Day of Prayer for the Cooloola Coast, on Friday March 2, at 10am.

This year the host country is Suriname, which is part of the Guianas, an ecological region within the Amazon, in the north-eastern part of South America.

The theme, prepared by Surinamese women, is: “All God’s Creation is Very Good!”  Guest Speaker is the Reverend Ingrid Busk, Anglican Minister of the Church of Good Shepherd, Rainbow Beach.

The Combined Churches of the Cooloola Coast, with the Surinamese people, highlight some of the issues women and children in Suriname face.

Organiser Donna Hope said, “It’s a privilege – we only host the event every four years, and this is our second time. It is a good opportunity to come together as a Christian community to embrace other cultures and countries.”

There is a DVD depicting the country and the problems they face, plus music and a collection.

“Nobody I spoke to even knows where Suriname is. It is a chance to learn about another country and what they are all about – the joys, the food and history,” Donna continued.

“Dutch is the main language, with roughly 540 inhabitants, and the country is mostly rainforest. It is also an example of ethnic diversity and multi ethnic cuisines!”

Anyone who has links to Suriname or has travelled there, or if you would like to be involved in the event, please contact Donna Hope on 5486 8199. You can also attend the planning meeting 9.30am, Monday February 5, at St Peter the Fisherman Catholic Church.