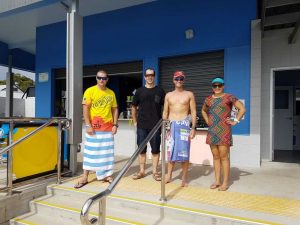 Last month a group of riders from Hervey Bay arrived in Rainbow Beach – they told BJ Parton from the Aquatic Centre that it “was not just for training, but for fun”!

Nine riders and one support vehicle left Hervey Bay at 5.15am. Travelling around 30km per hour, arriving in around 8.30am.

BJ Parton said, “Then they hit the road towards Inskip for a 8km run, finished by a 3km swim at the Aquatic Centre.”

They allowed themselves a little rest before they rode back to the Bay the next morning.

“They said what an amazing ride it is and to know you will arrive in another beautiful place helps to motivate, ” BJ explained.

“This is an awesome way to train and keep fit but also a great way to travel with less impact on our environment.”

The government agrees – motor vehicles are to provide cyclists with a minimum passing distance of one-metre when overtaking cyclists at 60km/h or less and a metre and a half when the speed limit is greater than 60km/hr.

Motorists can cross centre lines, even on roads with double unbroken lines and drive on painted islands, as long as it is safe to do so to pass a bicycle rider.

Government was also expanding the state’s dedicated cycling network to make it easier and safer for Queenslanders to cycle.

“Rainbow is beginning to be known as a great place to train with no distractions and busy roads.” BJ suggests that,  “Instead of giving cyclists the finger give them the thumbs up!”