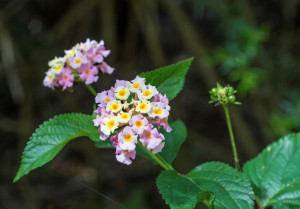 We recently spent a few days in Conondale National Park and, although it was a lovely, quiet spot, it was sad to see the extent of Lantana camara invasion.

Lantana is a highly invasive weed, originally from Central and South America. It arrived in Australia in 1841 and now covers around 5 million ha, mostly in the coastal areas of Queensland and New South Wales.

It readily invades areas where native woodlands have been disturbed and can form a dense understorey that restricts the growth of native plants. The woody canes can increase the fuel load in the forest as well.

Some of the reasons for lantana’s success are that it: thrives in warm, high-rainfall areas; can survive long dry periods; will tolerate poor soil; can fruit and flower year round in good conditions; has seeds that may be viable for up to four years and are effectively spread by birds and some mammals, and has a dense, shallow root mass and also grows from the base of stems or horizontal stems.

Lantana is a Weed of National Significance (WoNS) because of its extensive distribution and its negative impact on conservation, biodiversity and primary industries. It is a Class 3 plant and it is illegal to sell or distribute any variety of it.

The cost of controlling lantana is estimated at more than $22million per year.

Control methods include manual and mechanical removal and the use of fire and herbicides, but the timing of the use of these in the life cycle of the plant can be critical to success.

Follow-up control is imperative with this hardy, persistent weed.