Proud parents, Jake and BJ Parton’s eldest is planning to work hard during a gap year. Cyndari has represented Gympie State High School for surfing at state level, and will be assisting at the Rainbow Beach Aquatic Centre with children’s swim lessons and continuing at the IGA where she’s worked for the past five years.

Completing her schooling at Rainbow Beach State School, then Tin Can Bay P-10,  Cyndari plans on a nursing career from 2019.

Rainbow Beach locals Michael and Cate White have a double reason to celebrate, with their gorgeous twins completing their schooling. 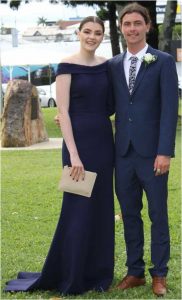 Elizabeth has excelled in her school years. She has graduated from Gympie State High School with a Bronze Academic Award, swimming age champion, and the Leslie Family Memorial Award for being a quiet achiever with her academic studies.

After finishing her part time work at the Surf Club, lifesaver Elizabeth will be moving to Tasmania early January for her gap year: “I will be deferring from university (if I get in, fingers crossed) and hope to study physiotherapy.”

A graduate of Gympie State High School, and school captain at Rainbow Beach State School, many of you will know Nic from when he worked behind the bar at the Surf Club.

The School Representative in Queensland Surfing Titles is just back from a surfing trip in Bali and says, “I’m hoping to get an apprenticeship in plumbing and currently renting a place on the Sunshine Coast and travelling from Rainbow to there.”

His housemates include Rainbow locals Eric Lawton, Kale Fullarton and Felix Laird. Nick says the plan is to also surf as much as he can!

Rainbow Beach lifesaver and Rainbow Beach State School student Zack topped math B, physics and chemistry and won the Long Tan Award for Leadership and Teamwork. To the delight of parents Brett and Sandra, he was also crowned Dux of St Patrick’s College.

“I am planning to study coastal engineering at the Australian Maritime College in Launceston.”

Employed by the Gympie Aquatic and Recreation Centre and contemplating a season working at the snow, Zack says for his gap year, “I am currently living on the southside of Gympie, but I wouldn’t mind moving to the Sunshine Coast or back to Rainbow Beach.”

A boarders prefect and swimming co-captain, Kate has studied at St Hilda’s School in Southport for the past two-and-a-half years. Achieving an Academic Merit Award and The Ammonite Award for Rowing, Kate is hoping to study a double degree in Business and Maths in 2019, at QUT in  Brisbane.

For 2018, she has been selected for the Australian Defence Force Gap Year as a driver specialist. Kate works part time at Rainbow Beach Surf Club and Crème de la Crème, scooping ice-creams until she moves to Kapooka for army training in Wagga Wagga mid January.

Ruby is a familiar face at the Rainbow Beach IGA, working part-time during school. A graduate of Gympie State High School and Rainbow Beach State School, Dad, Cliff, and Mum, Carmen, will be pleased that Ruby achieved not one but two Academic Excellence awards – First in subject for Certificate II in Rural Operations and First for Recreational Studies.

Ruby says, “I plan to move to Mackay in January to start the next chapter in life and work full time.”

Sarah is pictured with Beau Nicholls

Sarah says, “I have graduated high school and have been accepted into uni for a Bachelor in Nursing, but I am now currently looking into my options for applying for the Army and completing it that way.

“I’m currently living back with my dad whilst I study and work part time at Woolworths in Cooloola Cove and at the news agency in Gympie. In the near future I will be looking into moving back to Gympie for future study if I don’t get accepted into the Army.”

Just turned 17, and back from a Japan trip, Jasmin has an exciting time ahead.

“I’m planning on heading off to the Navy as a submariner medic, and currently a waitress at the sports club, and completing a Certificate III in Fitness at the local gym.”

After attending several Navy camps, Jasmin had already been offered her profession of choice months ago, but wisely opted to graduate from Gympie State High School first. Until the round comes again, she is working in Rainbow Beach and living at home with parents, Andrew and Kylie.

Natasha graduated from: St Patrick’s College Gympie, and lives in Tin Can Bay, where is is currently working at the library and Lee’s Fishing Company.

“I plan to have a gap year of travel and work, followed by study at university for Nursing. I am hoping to attend USC at either Gympie or at the Sunshine Coast..”

Natasha is also planning on travelling to NSW, and also Mexico and Canada.

Ella-Rose is now working at Hampton and Harlow, and Nolan’s Meatworks. Equestrian Captain at Victory College, and winning a second at the the Matthew Flinders Jumping Day in Buderim, a gap year will let Ella focus on working, eventing with her horses and equestrian dressage, as she applies for the Police Force.

With her brown belt in Karate, having trained by local Darren Grieve, and her love of horses, Ella-Rose dreams of joining the Mounted Police.  Her parents, Andrew and Alison, now live on the farm in Gympie, but their Rainbow Beach house is let to holiday goers – so we hope to see them through summer.

Shervawn is finishing work at the IGA in Rainbow Beach and Tin Can Bay at the end of January. “I am hoping to get into QUT in Brisbane to study for a Bachelor degree in Justice for Criminology. And I will continue playing lawn bowls and singing whenever I can! I dream of having a good job with a steady income.”

Matilda obtained a silver academic award and cultural/ citizenship award, and he proud dad, Jamieson, says Matilda is planning on pursuing either corporate law or something in advanced medicine, she isn’t quite sure which yet!

St Patrick’s College graduate, and the second daughter of Scott and Rebecca, who are very proud of Madalyn’s achievements. She is also a student from Tin Can Bay School, and has completed her Certificate II in Business and works at Cooloola Coast Clinic.

The Tin Can Bay resident plans to obtain her Certificate III in Business this year.

Attention: Graduates and your families from the Cooloola Coast

If you have not yet sent your update, I am still happy to include your formal photo and plans for 2018 in our February edition – please email info@rbcn.com.au by January 15.