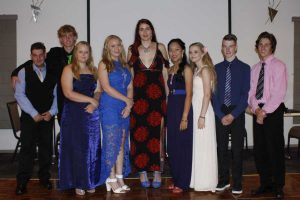 Congratulations to all of the outstanding Year 5 Students who participated in the application process for Junior School Captains.  At the awards evening last night, I had the pleasure of announcing our Junior Captains for 2017:  Captains: Amber Daniels and Ell Yates, Vice Captains: Elsie Gray and Imogen Latimore. Congratulations girls!

The application and selection process for Junior House Captains for 2017 will begin shortly.

Over 150 students were recognised this year at Awards Night for Cultural, Academic and Sporting achievements over the past year.  Yet again I am impressed with the conduct of TCB students and the respect they displayed during the ceremony. Congratulations to all.

Sportsperson of the Year – Drew Holt

Year 10s were presented with certificates on stage, attended an orientation morning at Gympie State High School and their Graduation Dinner at Rainbow Beach. I wish the Year 10 students all the best for their future studies and work endeavours.

Water Familiarisation Lessons are finalised. Student participation in this activity has been outstanding, and we were able to keep the cost of the activity to a minimum by using the Lions bus and ferrying the students to and from ourselves. The 4-9 Swimming Carnival will be on December 1.

Holt Bolt Challenge will be at the school on December 5 for the rewards day. Holt Bolt bring inflatable slides, water activities, laser tag and obstacle courses. The school is subsidising the activity so that it costs no more than $5 per student (instead of $11).  Students have been informed that they need to demonstrate attendance better than 90%, no unexplained absences and be able to show they make positive choices both in and out of the classroom.