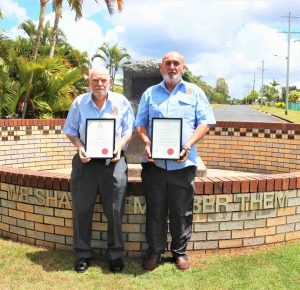 Life membership of any club is an honour and these two men have earned that respect after helping out at the Tin Can Bay RSL for nearly 18 years.

Terry Steele and Stanley Ward have done hours of voluntary work for the RSL from painting to being the president.

They ran the BBQ every Sunday with their wives –  the boys cooked and the women prepared the food.

Both have military backgrounds, with Stan in the Navy and Terry in the Army.

Stan signed up in 1958 in Brisbane as a Stoker in the Engine Room at only 19 and stayed in the Navy for nine years.

“I saw one third of the world from Ceylon, which is now Sri Lanka, to Hong Kong to New Zealand.

“Most of my time was in the far east and I would have stayed except I was married and had kids, so I wanted to be with them.”

Terry was only 16 when he joined the Army in January 1966 as an apprentice electrician and spent 20 years in the forces.

“I was supposed to go to Vietnam three times, but they sent me to New Guinea instead.

“I went into army aviation when I was 20 as an electrician at the end of 1969 and we were on the support ships for the troops in Vietnam taking supplies.”

Both said it was nice to receive recognition for what you do and both were honoured by the award.

Congratulations men and thank you