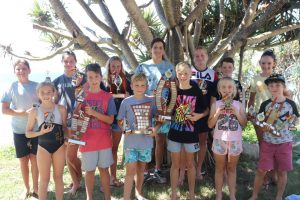 Congratulations Age Champs and Emma Worthington, Nipper of the Year!

Thanks everyone, for a fun filled nippers season, despite the weather! It would not have been the success it was without a lot of support, so I sincerely thank everyone involved. Our sponsors: Rainbow Getaway Holiday Apartments, Rainbow Beach Cooloola Coast Community News, Rainbow Sea Resort, Tony Perrett, Sportspower Gympie, Cooloola Coast Realty, Water Safety Team, Michelle Gilmore, Age Managers and Assistants, Vicky and Justin Schooth, Ron Organ, Kelly Smith, Brooke Bignell, Fiona Worthington, Shane Handy and committee.

The parents have been great this year, thanks to all who have helped out or contributed. I feel that there are some good signs showing for future years. We need to increase our numbers so ask your friends if they would like to join you on a Sunday morning. Have fun in the off season.

Under 8: Luke Richardson and Emilie Dwine

Under 10: Bailey Sanderson and Sienna Arthur

Under 12: Jake Rooks and Emily Schooth

Under 13: Adam Campbell and Jasmin White

Outstanding Nipper of the Year: