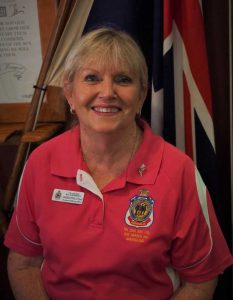 In the Queen’s Birthday Honours List, our own Maureen Costello was honoured with a Medal (OAM) of the Order of Australia in the General Division for service to veterans and their families.

Past and current members and volunteers of the Sub Branch thank Maureen for her service.

Now, on to the less exciting news, just a heads up, no date yet, but we will be having an information session with Suncare to talk about current changes to policy.

Our usual events will take place – first Tuesday of the month is July 2 and is our Carer’s Day – It is run by Carer’s Queensland and they could also help with NDIS or Aged Care. If you want to find out any information about being a carer or about any changes to the system, come along and listen. This is open to anyone in the community.

Next, we have our Veteran and Community Morning Tea on July 9, commencing at 10am. Laurence will be playing again this month to the delight of those who attend. Open to both veterans and community members.

Our regular BBQ and raffles are on every Sunday commencing at 12pm, with raffles being drawn at 2.30pm. Join us for a burger, hamburger $6 or steak $8, and listen to enjoyable music by local musicians.

We had a huge day in June, with the ukulele group coming along one Sunday and bringing their fans and playing for all who came. Somehow, we managed to squeeze everyone in and Terry was able to cook all the burgers that were needed!

We are still open for the Drop-In Centre on Tuesdays and Wednesdays, 9.30 to 11.30am. If you have any questions or just want to talk to someone, these days are usually manned by our Welfare team who can hopefully steer you in the right direction to find any information you need.  We often have someone who is a JP (Qual) and can authorise documents for you.

Lastly, our new deck is finished and up and running. A big thanks to all who worked on seeing this project to fruition, the end result was worth it.