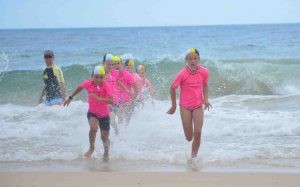 Nippers during the fist of their three age championships for the season. Photo: Julie Pratt

The Nippers have been very busy throughout November with the completion of a number of CPR and First Aid courses, the first of three Age Championships for the season and competing in a number of carnivals near and far!

Bryce and Breanna Hoult travelled all the way to Rockhampton to compete in the 2020 North Aussies carnival where Breanna made it into the finals for the Ironperson of her age group.

The same weekend saw Oliver Pratt, Finn Dimmock, Sienna Arthur and Elle Dimmock compete in the first of the Queensland Beach Series carnivals in Mooloolaba. Sienna took out first place in the Flags on this day and what a show it was to see!

Also last month, Mason Bignell, Oliver Pratt, Finn Dimmock and Bryce Hoult made a team of U13 boys and represented Rainbow in a carnival at Dicky Beach.

The events were the Cameron Relay, Board Rescue and Board Relay – all water-based events and the northerly wind blew 40knots straight into Dicky Beach, making for very tough conditions.

The boys spirit and determination shone through and they continued to support each other and strategise to the very end!

Most recently on the carnival calendar Sienna Arthur and Bryce and Breanna Hoult represented us at the Junior Rebel Carnival held in Maroochydore with Sienna again taking out first place in the U12 Female Flags!

Now it’s time for our younger Nippers to shine at the Noosa carnival at the end of the month where we’ll be represented by Clayton Fletcher, Emilie Dwine, Xavier Toole, Oscar Toole, Aimee Richardson and Luke Richardson.

Good luck to all of the competitors!  Our 2nd Age Championship and our last day of Nippers and our before the summer break will be Sunday December 6th and we will resume again on Sunday January 24th, the last weekend of the school holidays before school starts.  See you on the beach!

We will resume again on Sunday, January 24, the last weekend of the school holidays before school starts!

See you on the beach!