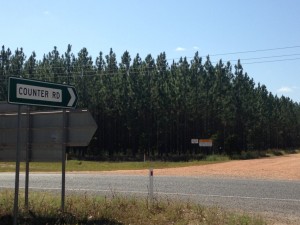 It seems the progress towards sealing this tourist route has as many bumps as our 4WD tracks.

How many times have tourists arrived in town, shaken and relieved after following their GPS on the “shortest route” to Rainbow Beach? Of course the device does not tell them it is for 4WDs!

“It is a familiarisation of both options to place the issue in the mind of decision makers”, said Tony Perrett. “The coastal link currently ends at Tewantin, and both our Southern and Northern neighbours would agree it is a vital link for tourism”.

The project was urged by the Rainbow Beach Progress Association again in the Inskip Peninsula Master Plan feedback this year: “this inner coastal network keeps holiday traffic off the highway and provides direct alternative access to our tourism area”.

The two possibilities are Counter Road and Cooloola Way. Once again it is an issue that has been considered before, either option would help take the burden off the beach and the Bruce Highway, and both have been the subject of options analysis and route selection studies in the past.

Cooloola Way is a 32km dirt road that connects Rainbow Beach Road and the Kin Kin–Wolvi Road, is suitable for 4WD vehicles only.

In the informative 2009-2017 Sunshine Coast Tourism Opportunity Plan (at http://teq.queensland.com), a section was devoted to the “Development and Sealing of Counter Road” (page 24). The report recognised the “potential for Rainbow Beach and the Cooloola Coast to establish itself as a major ecotourism and resort destination in South-East Queensland”.

It states, “One of the additional forward infrastructure projects that has been identified is the sealing of Counter Road from Boreen Point to Tin Can Bay. The sealing of this road will open up the Cooloola coastal area for access from the rest of the Sunshine Coast coastal areas and the possibility for establishing a fully sealed Tourist Route from Noosa to Cooloola Coast.

The report emphasises that extension of the motorway should proceed at least through to the Cooroy/Noosa Road and eventually to the highway at Maryborough.

Current issues which the road development will address haven’t changed since 2001:

There is no harm in thinking positively, we have had a win with the beach fees, why not the proposed coast route too?