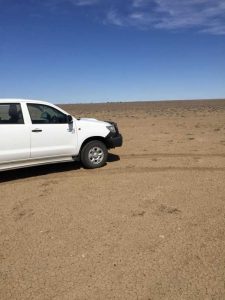 This property had 30 mm rain last October and then 14mm in early June. They have had more rain around June 15, but as you can see it is bare dirt. Image Tony Stewart

Tony Stewart tell us that contrary to what the TV and newspapers say the drought out West is far from over in many areas.

“The rains have been a godsend in replenishing household tanks and dams in many areas, and has been great for subsoil moisture, but if only it came in the warmer months.”

The wet has created more hardship to some properties with one farmer losing 2000 sheep after the first rain in early June. Many properties also shear at this time of year when it is normally dry in Western Qld.

“Most properties around Longreach and Winton have destocked long ago and so they along with many others that area are still having great difficulty putting food on the table,” Tony explains.

“Many donations of food and everyday necessities have been coming in for our next run out West at the end of June or early July but much more is needed. There are many organisations Statewide delivering supplies.”

If anyone can help it would be much appreciated. Matt, Bernie and family at the IGA have kindly helped by providing a trolley for donated goods from their store. Any non-perishable food items or toiletries could be left in the trolley.

Organiser Nikki Wilson said, “I would like to thank all those who contributed to and supported our garage sale, raffles and made cash donations towards our appeal to help drought stricken farmers.

“We raised a total of $510, which has been deposited into the “Drought Angels” account at the C.B.A.  The raffle was won by Jean of Tin Can Bay.”

Once again many thanks to those who have helped contribute to this cause across the coast.

For more information on the Rainbow Beach Drought Runners call Tony on 0408767930.