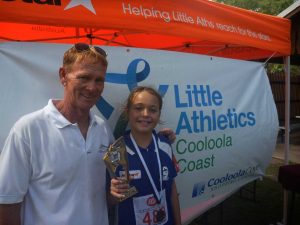 Bill McKechnie played for Wynnum Manly, has run the  Stawell Gift, and world titles in Surf lifesaving! And now he gives his all to Cooloola Coast Little Athletics as coach….

You don’t have to be an athlete to enjoy little athletics; you just have to want to have fun! “Fun family fitness is what the organisation is all about” Cooloola Coast Little Athletics Manager Jess Milne explained. “Our greatest asset is our coach. I believe that his enthusiasm and experience brings a dynamic to our organisation that will inspire the next generation.”

Paving the way to athletic success is Tin Can Bay local Bill McKechnie. Coach Bill started in little athletics as a 5-year-old. He continued athletics through his schooling years, always doing well but was not necessarily the best.

At the age of 18 Bill went on to play rugby league for Wynnum Manly, earning a professional contact. After watching his on-field skill, he was approached by Macksville Gift winner Gary Taylor to try professional sprinting.

“When I get flogged in my first race I will go back to the footy,” was Bill’s reply. He never did return to football because he won that race by a good margin, thus beginning a 30-year professional sprinting career.

“My father was a swimmer who made the 1956 Olympic squad, however I have taken after my great grandfather who was an Australian champion runner.”

In 1986 Bill was the first Queenslander in 38 years to make the Stawell Gift Finals. A ‘Gift’ is a 120m footrace. Bill has trained with some leading athletes, including Carl Lewis at the Santa Monica University in Los Angeles.

When Bill was 28 he took a break from professional sprinting and started surf lifesaving, spending the next 20 years winning 15 Queensland, three Australian and three world titles for sprints and flags. He has won the beach flags event at every Queensland carnival at least twice.

As a member of the Queensland Surf Lifesaving Talent Identification Coaching Panel for ten years he trained many Queensland and Australian champions, including Deanne Wilkinson, Austin Weir and Trevor Hendy.

He also sprint trained a 12-year-old boy who did okay on the sand, however blitzed the field in the water, so Bill suggested he “stick to the pool.” That young man grew to set a 1500m freestyle Olympic record – Mr Grant Hackett.

Bill believes that Little Athletics set him on the road to success in life through never being scared to try anything, developing mental and physical strength, learning sportsmanship and meeting new people.

“Hard work never goes without reward,” is Bill’s motto and he wants to bring this to the Cooloola Coast Little Athletics training days.

“The most important thing is for participants to have fun. Also to feel pride in improving at something they are having a go at, whether it is a centimetre or millisecond. It creates confidence and a sense of achievement!”

If you would like to take advantage of the wealth of knowledge and experience that Coach Bill McKechnie has to offer, then get your child signed up for the next season of the Cooloola Coast Little Athletics Centre.

Sign-on will be at the ‘come and try’ day on Saturday August 26 at the Tin Can Bay School Oval, on Snapper Creek Rd from 9am-10.30am. Training starts in October and will run every Saturday morning from 8.30am until 10.30am.