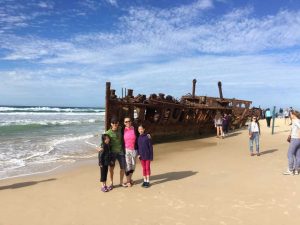 Chloe, Grace, Vihn and Emily Tran loved their stay at Rainbow Beach, a day trip to K’gari and a very special kayaking tour!

Grace Tran and her family visited Queensland for the sunshine. They have marvelled at the Glasshouse Mountains, Noosa Everglades and Fraser Island, but when a juvenile humpback whale approached them on a dolphin kayaking tour, they and the 14 other paddlers had an experience they will never forget.

Grace and Vihn Tran, and their girls, Emily 12 and Chloe 8, booked into Rainbow Getaway for three nights to escape the southern weather.

“We’ve never been to Rainbow before, and it was awesome,” Grace said, “We loved it.”

After a few days on the Sunshine Coast they travelled up to Rainbow Beach, booking all their tours on the way.

The family loved the day trip to Fraser Island, but the highlight of their stay in Queensland was when they joined locals Sean Permezel and Ty van Santen from Epic Ocean Adventures.

Launching from Double Island Point, Grace said the group were wowed by two different pods of dolphins, one pod was even surfing with the boardriders.

Then at the end of the trip, she said, “We saw the whale about three metres away. Man it was amazing, I can’t believe we were that close!”

No wonder, Ty estimates that the whale was about eight metres long, but they can grow to around 16 metres.

As instructed by Ty, they deliberately stayed back.

“We were literally right next to the whale. The girls were saying, ‘Oh my God, there is a whale right there!’

She said the whale really seemed like he wanted to hang around, and that he was turning to show them where the problem was.

Grace said it looked like the whale had been attacked at some point.

“Then Ty was explaining the rope was restricting the fins.” 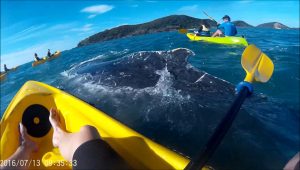 This Epic Ocean Adventures kayak tour got more than they expected!

The experience was distressing for the family too. The girls and their parents saw first hand what impact humans had on marine life.

“We know “we” caused it – watching it was so bad. It was a good lesson for us on what could a rope do – let’s be more careful.”

But they were really grateful that Ty helped.

“When you are whale watching it is a respectable distance, in this case the whale came up to us. We are unlikely to ever get that close again.”

Ty told the Community News about the adventure:

How did the whale seem to seek assistance?

“I am no whale expert that’s for sure, but from my experience with humpback whales on tour I have never had a humpback come alongside the kayak like it did. I have had plenty pass by underneath, rest on top of the water from a distance or come up for a close look and move on.

“Initially when it surfaced very close it lay there calm and then moved towards us right up alongside touching the kayak. It lay there calm again, we moved off a couple of times to give it some room and it seemed to keep following us.

“When it come over again against us it rolled onto its side and that’s when I saw the rope tangled onto its flipper and restricting it.

“I watched it briefly and was already blown away by the experience when it continued to turn on its side then back again.

“It was hard to see exactly where the rope was going, I could see two lengths trailing out towards the whale’s tail. I was sure this whale wanted some help and I felt I could possibly remove the rope so it could swim freely once again.

“If there had been a huge tangle of rope I wouldn’t of attempted it obviously, but what I had seen wrapped around the flipper I was going to try. That’s when I pushed the kayaks back a bit and attempted to remove the rope.”

Could you see other whales or its pod nearby?

“No. We were watching a large pod of Bottlenose dolphins playing when the whale surfaced from behind. This was the only whale we saw for our two hours on the water.” 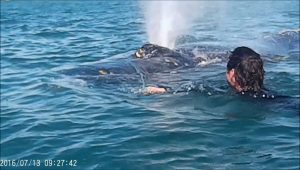 Have you heard any more on the progress of the whale you helped? Has it been monitored?

“Unfortunately not. Parks and Wildlife were monitoring the whale moving at good speed towards Rainbow Beach after our tour which was a good sign. I did see it at DI again late afternoon but since then it seems to have moved on.

“There are well over 20,000 passing by this year and they travel such long distances. It’s a big ocean, fingers crossed it’s doing okay.”

What sort of press did it bring?

“It has been mind blowing! Social media is incredibly powerful. Media was local, national and international. Facebook, Youtube and the Daily Mail have had huge interest. Web site traffic has seen big interest from not only Australia but the USA, Brazil, UK and Germany.”

Have you had more bookings?

“Yes we have had a good increase in bookings. Inquiries on the best time to experience Rainbow Beach and plenty of inquiries on how the whale is doing too. Hopefully an increase to all local businesses to benefit from more visiting this spectacular location.”

Is it your closest experience with a whale to date?

“Yes it was incredible. I have seen plenty of humpbacks come through, some more curious than others but this experience was something else.”

“My adrenaline was pumping when I was in the water that’s for sure. When I followed the rope to the whale’s mouth I could see its big eye looking at me. From the scars and wounds it had it had been through a lot but still was okay with me there I thought.

“I just tried to get the rope free as quickly and calmly as I could. I was just shattered I didn’t have a knife to cut the rope away.

“For the backpackers some were freaked out at the start. It’s something they wouldn’t even dream of experiencing living in Europe. Once they saw how calm it was they were very excited, intrigued and concerned for the whale.”

I’ll bet you are still are thrilled with the experience?

“Blown away really. One thing you cannot predict is wildlife and to experience some of the world’s most incredible creatures in such a breathtaking location is surreal.

Sean and Ty are still amazed by the whale’s ability to try to communicate for help. Other participants on tour said this was the highlight of their travels in Australia so far and they hoped to hear of good news that the whale will survive. Find out more about the Kayak tours by calling Epic Ocean Adventures on 0408 738 192.