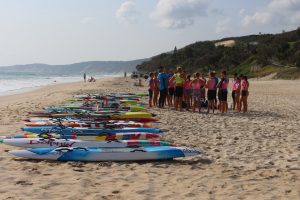 He was officially recognised for his sporting achievements as a champion Australian by being awarded an O.A.M.

The camp he conducted was for the Metropolitan Caloundra Surf Life Saving Club for their U14-U17 members to develop their ability for the major competitions that are fast approaching at the back end of summer.

Clint said: “We work on their general skills in all elements of competition, which involves board paddling, swimming, running and the culture that is required to not only improve but understand how to be successful.

“We conducted on- and off-water training sessions over the few days we were there and gave presentations after dinner on key aspects that are required.

“The young charges in these age groups have the ability to make significant changes with these short-focused camps that feature 3-4 sessions per day.

“The camps are tough and require a good level of concentration and a large amount of physical effort which certainly tests everybody’s resilience and ability over the given challenges we set for the whole group.”

Clint said: “We really enjoyed our time in Rainbow, and I know all the athletes and support staff enjoyed their camp at the great facility that Rainbow Beach Surf Life Saving Club has to offer.”