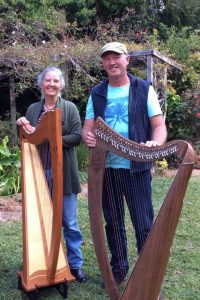 It’ll soon be Christmas, and there will soon be another Simply Classical concert. It will be held on Sunday November 24, at 2pm at St Patrick’s, Gympie and is called Christmas in Foreign Lands.

Local Libby Schmidt, who comes up from Brisbane every fortnight to play for church services, will play for us variations on a Christmas song by JCF Bach, as well as Noelle Suisse, by a French composer.

Rhonda Mitchel, a music teacher living in Bundaberg, has lived in Germany for several years and is going to sing some of the best “Weihnachtslieder” she came to love in German, as well as a French, a Spanish and a new Zealand song and a “Cowboy Carol”.

Simply Classical has presented the harp before, two quite different instruments in different concerts, but this time we will have a harpist duo. They are musically travelling through Europe, including stops in Sweden and the Isle of Man.

A new young singing group is emerging in the region, they sang at the recent Cooloola Coast Orchestra concert at the TCB Community Centre, to great applause, and the four were hired on the spot for Simply Classical. Meanwhile, they have expanded to eight, and their leader, Georgina Thomas, will have to come up with a name for the group before the concert.

We are going to have two Daniels performing, in quite different musical fields. Young cellist Daniel Shearer gave a bravura performance a couple of concerts ago, and will be back with a whole string quartet in tow. They are going to play a Christmas concerto by Italian composer Corelli, and excerpts from the Nutcracker for a Russian component.

As luck would have it, vocalist Daniel Jess, well known to Gympie audiences, has some spare time at the end of November to oblige all those who repeatedly ask to include him again in our concerts.

Not everything has been finalised, but there will be poetry, a flute with North American – Indian tunes and Christmas piano music from Poland.

This is going to be a well travelled concert, and we hope that many people will be travelling to St. Patrick’s to hear it. Hoping to see and talk to you at our famous afternoon tea on conclusion. Admission is only adults $15 and children $5.