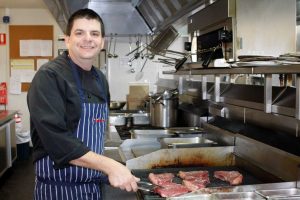 Your tastebuds are in for a treat! Chef, Darren Gibbs, has joined the Rainbow Beach Hotel, with his delicious summer menu ready to be savoured.

“I’ve sourced some great produce for this upcoming menu,” Darren shares. “It has a real beach feel, with a splash of local seafood and the best Australian meat cuts.”

Darren did most of his training in Airlie Beach and the Whitsundays, most recently working in Goondiwindi. “My father forced me to become a chef; he didn’t want me to laze around,” he laughs.

Originally from Brisbane, Darren was the executive chef for Queensland Cricket for a number of years, cooking for sporting stars, government officials and three prime ministers, plus TV cheffing and a BBQ for the premier and 2,000 people at the Gabba.

Together with his wife,Orathai, who has also joined the team at the hotel, and baby son, Benjamin, they moved to Tin Can Bay two months ago, “I wanted to be back near the water. After 20 months in Goondiwindi I missed not being able to walk or drive to the sea.”

Spending more time with his family was the driving factor in the move, with a certain pastime a close second. “I do love fishing,” Darren admits, “I will definitely be wetting a line sometime soon.”

In his new kitchen Darren aims to create,“good value, great taste and something for everyone. When people come here, I want the Rainbow Beach Hotel to be the best place to eat.”