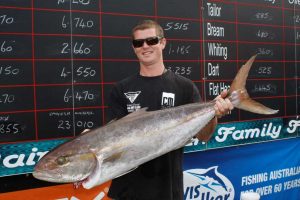 Byron Rush from Rainbow Beach brought in this whopper a 14.855kg Amber Jack, which was topped by Kane Maley from Caboolture and his 23.010kg Spanish mackerel in the Big Fish category

The Rainbow Beach Fishing Classic is a highlight of the coast’s calendar. Touted as Biggest Family Fishing event in southern Queensland, some huge fish were seen during the week.

There is the possibility that the CADET division will be taken out as the numbers have dropped as well. But all the feedback has been positive – a big thank you to all the sponsors, organisers and volunteers who made it happen.