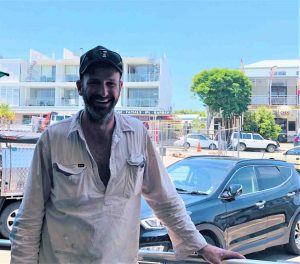 We get our share of good looking celebs at the Cooloola Coast and I always miss them, so it was a treat to have a chat with Married at First Sight star, Mick Gould.

He was in the 2019 series of Married and his time on the show was pretty tumultuous with the country boy spending so much of his time in a room either by himself or arguing with his ‘wife’.

If you saw the show you will know he definitely didn’t get to meet the love of his life, but he said:

“Oh, it was not all bad, I have been able to get involved in a grassroots political movement called the Green Shirts Movement which is all about supporting farming and the fisheries.

“And, I did get to meet my girlfriend indirectly from the show.

“We were both invited to a party in Melbourne. We just said hello there really and it wasn’t until we caught up again as guests at the Goondiwindi Races that we got to know each other and realised we got on pretty well.”

Mick is in Rainbow Beach to work on the Plantation Resort. He also worked on the 14th at Rainbow cafe three years ago, but has been a big fan of Rainbow for years.

“I love the freedom and how laid back it is and how it is the complete opposite to Noosa.

“The worst thing would be for it to end up like Noosa.”

Mick and his girlfriend live on his Mothar Mountain property with their sheep, pigs and chooks and dog, and love being able to be private.

If you see him around, say hello, he is very approachable and much better looking than on the show!