The second Rainbow Beach Sandcastle Competition was recently held on the beach near the SLS tower, with eight teams made up of locals and visitors. It was a lovely warm day and all of the teams worked extremely hard to create some wonderful sand sculptures.

Local artist Peggy Phelan kindly agreed to be the guest judge of the competition with the difficult task of choosing the winners of the three divisions, and Councillor Mark McDonald from the Gympie Regional Council presented the awards to the following teams:

Open division: The Sandy Cracks for their replica of a SLS jet ski

Most creative sandcastle or sand structure: Team Oscar for their fabulous lighthouse

Most lifelike animal or bird: Team Turtle for their turtle sandcastle

Encouragement awards of bags, vouchers and body boards were presented to The Mermaids of Rainbow, The Golden Eggs, The Beach Jets, RUOK and The Sea Sponges.

Thank you Peggy and Councillor McDonald for being willing to come along for the official part of the competition and to everyone who helped out on the day including Mike Timperon, Karen Van der Heijde, Mick Emery, Margaret Cudahy and Phil and Maree Heron.

Lastly thank you to the local families and visitors who entered a team and for being so enthusiastic. Proceeds will go towards supporting chaplaincy in the local area. 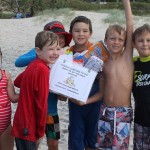 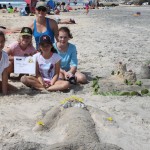 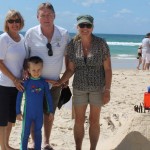 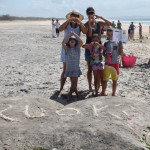 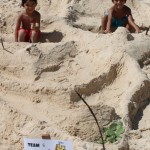 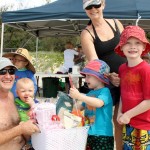