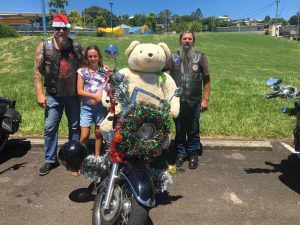 Club President Stephen ‘Moose’ Ollier, Keira Powers, and Stephen O’Shea with a giant teddy donated by one of the RBSS students

Caring local Keira Powers is a student and also arts and cultural captain at Rainbow Beach State School. This year she organised for the school to be a donation site for the Gympie Military Motorcycle Clubs yearly Christmas toy drive.

“The students at the school, their families, and the community were very generous with their donations,” said Keira’s proud mother Marissa Paulden.

“Keira was able to take a car boot full of toys from the region to donate. It is wonderful to see Keira and the other students donate many of their own toys, and to think of children less fortunate than themselves.”

The toys were distributed in the Cooloola Coast and Sunshine Coast area by the bikers in conjunction with St Vinnies.

Keira would like to thank her fellow students and the community for supporting such a great cause.  She is hoping that it will become an event that the Rainbow Beach community will support each year.

Members of the motorcycle club plan to visit the school in the New Year to thank the students.

Military Brotherhood MMC Cooloola-Sunshine Coast said: “This year’s Christmas Toy Run was hailed a success with a collection this year bigger than expected, and with 120 bikes and cars it was a great day with much Christmas spirit and cheer to be had by all who attended. So many thanks to you all for your donations and support throughout the year, we really appreciate it.”