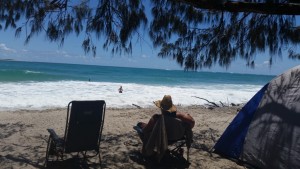 The capacity of camping numbers at Rainbow Beach has been raised for consideration in the State Government report on the Inksip Point ‘landslip’.

Member for Gympie, Tony Perrett said that he had urged the Government to make sure that any decision caused no net loss of camping areas available on the Peninsula.

“If a camping ground needs to be closed or moved further back from the shoreline, additional areas should be made available to accommodate tourist numbers” Mr Perrett said.

Rachel Croker from Rainbow Beach Ultimate Camping agreed, “Years of gradual erosion have dramatically decreased absolute beachfront sites [from] what they were ten years ago. It would be great to see more areas opened so that the overused sites have the chance to regenerate.”

Preliminary geo-technical and investigative work was reported on at the end of last month.

Mr Perrett raised concerns on the potential impact of any report and requested that any new area management processes and practices not limit, or impact camping activities over the Christmas period.

“I appreciate the need to act quickly and that temporary measures may have to be in place should there be another incident,” Mr Perrett said.

“An incident such as the ‘landslip’ has the potential to generate kneejerk reactions.”

“Camping tourism and its associated activities are a primary source of economic activity on the Cooloola Coast and especially Rainbow Beach.”

“Any adverse impact on the attraction of the area as a desirable tourist destination will have a significant effect on the economic viability of the area.”

“If there is any overall change in the management of the area, I have urged the Minister to make sure that the Department consult with local businesses, the Gympie Regional Council and myself as the local State Member of Parliament,” Tony Perrett concluded.