The talk of the town over the past fortnight has been the ‘bombing’ noises coming from near Rainbow Beach and Tin Can Bay and shaking the windows and buildings.

As someone who remembers these noises from my younger days, I barely notice, but it has created a lot of chatter on social media, so here is the official reason they are so loud at present.

“The area where explosives are permitted is at least 1.5 kilometres away from the edge of the training area and 6 kilometres from the closest community of Wallu.

“Defence seeks to use this buffer to keep noise and vibration to the minimum, however, environmental factors such as dense and low cloud over the blast site can reflect sound waves and make the explosions sound louder. 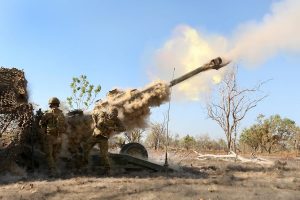 “Defence advertises twice a year in local newspapers, in particular the Fraser Coast Chronicle and the Gympie Times in this area, to notify of pending military activity. The latest advice provided to local communities was on March 6 2020. “

And there you have it – we are in good hands.