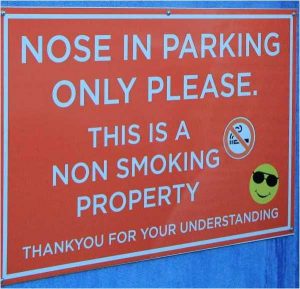 Signage outside the Top Shops in Rainbow Beach has decreased smoking at the venue, cigarette butt littering, and complaints from patrons, and could be extended into the main street Image Barb Rees

Sandy Brosnan is leading the way with an initiative that she feels will assist business owners, our residents and visitors – even the environment.

Sandy broached the idea of a smoke-free main street to Rainbow Beach Commerce and Tourism, “When the smoking ban was implemented in the Queen Street Mall in 2011, 82% of people surveyed supported a complete ban.”

Council introduced the law, and butt-out bins at each end of the mall, which had overwhelming support from businesses and residents. “They’ve seen great results, It has been very successful – the mall is always busy.”

Sandy successfully implemented a smoking ban, with attractive but prominent signage, at her business, the Top Shops, which incorporates Ocean Breeze Seafoods, a laundromat and medical centre.

She says the majority of her clients tell her, “Good. About time!”

All commercial outdoor eating or drinking areas in Queensland are smoke-free, with a buffer zone of five metres.

Many agreed that the eatery exclusion zone was not working well or that it could be extended or banned altogether in the main business area.

Says Sandy, “For the comfort of other patrons, businesses are expected to be the ‘smoking police’, no one likes enforcing the smoking laws.”

Rainbow Beach is a laidback community, catering for internationals with less modern smoking laws, but that doesn’t mean locals or visitors want to tolerate smoke drift when eating at outside café tables.

Sandy is very clear – she says the initiative is not about punishing smokers, simply making people aware of the boundaries.

Sandy proposed a “soft” approach – with a poster placed at each main street shop, and butt-out bins at either end of town, and a grace period.

“Every business I spoke to signed the petition – I think Rainbow Beach is mature enough and the momentum is there to pull it through.

“I just believe, for our town, we would be seen in a very good light, as well as displaying environmental sensibility.”

She felt this was important because of our unique location in a National Park, and neighbouring World Heritage area, Fraser Island K’gari.

Mark Beech, President of the Rainbow Beach Commerce and Tourism,  said members were largely in favour of the concept. “What we can do as businesses is encourage people not to smoke in front of our shops, which is impacting on other patrons.

“The Chamber’s role is like every other business issue – we have a united voice, so that we can work together. If every business encourages people not to smoke,  we are creating a smoke-free main street. Working together will have more of an impact than just one or two cafés or one shop.”

Since February 2017, smoking has also been banned within 10 metres of in-use campsites and any public facilities such as picnic tables, toilet blocks, barbecues, visitor information centres, shelters, jetties and boat ramps.

According to research, young people are much less likely to take up smoking if their schools, homes and recreation areas are no-smoking areas.

We know efforts to help adults to quit smoking and reducing exposure to smoking in public places also sends a positive message to young people about not smoking.

The Tobacco Laws also grant local governments the power to ban smoking in any public space not covered by a state-wide smoking ban.

Perhaps this is something Gympie Regional Council could pioneer for rural Queensland? Until then, community action is bringing progress to the main street of Rainbow Beach. What do you think?