Home  »  Things to See and Do   »   Brisbane’s blockbuster summer events 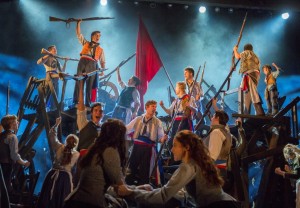 My family know I like musicals. Actually, that’s not true – I adore musicals. I grew up on a diet of Rodgers and Hammerstein, Andrew Lloyd Webber, Elvis, and Grease.

When Heatley, our daughter, Kate, and I were invited to Brisbane to see Les Misérables, I jumped at the chance. It didn’t disappoint.

I loved seeing a wonderful amateur Les Mis performance in Toowoomba years ago, and of course, many more people are familiar with the story after the 2012 movie.

But there is nothing like the experience of live theatre. The Brisbane production is a spectacle, and features the original phenomenal Australian cast, who won five Helpmann Awards this year, including Best Musical.

Regardless of the fact I knew the words of every song (I told you, a musical fanatic), the glorious new sets and staging brought the whole unforgettable story alive for me again.

We decided Eponine (Kerrie Anne Greenland) was a standout for us, but all the cast were magnificent. Make sure you see them before the season closes on January 17, 2016.

The city break didn’t stop there! After a delicious breakfast at the Stone Restaurant at our hotel, Mantra Southbank, we explored the parklands. Our boys would love Southbank’s destination playground and riverside walk only minutes from the hotel. The spectacular 360-degree view from the Wheel of Brisbane is also a great one for the kids!

We were impressed with our introduction to the premier exhibition of its kind in the region, the 8th Asia Pacific Triennial of Contemporary Art exhibition at Queensland Art Gallery.

Book into a free guided tour. Our volunteer guide fascinated us with her detail on the Australian Collection, and how it intertwines with one of the key APT8 works, Brooke Andrew’s “Intervening Time”.

We’ll be back to explore the Gallery of Modern Art (QAGOMA) and Queensland Museum, both new exhibitions continue until April 10.

I loved that we could walk everywhere, and we did – even fitting in a little shopping in Queen Street Mall. Heatley has said we’ll just cook up a BBQ now for Christmas, as it won’t be a patch on the delectable ham and turkey presented to us at the iconic Jimmy’s on the Mall.

Santa delivered “The Wonder of Christmas” to us, Australia’s largest free festive program, a four week extravaganza of live entertainment, magical decorations, festive feasts and fireworks displays in the Brisbane CBD and at South Bank. Another reason to return.

For other musical lovers, did you know that QPAC has a museum? It is a must see. With costumes, photography and film – it is like a trip backstage.

Brochures were displayed there of all the upcoming shows – and I pointed to one, and told Kate to ready herself for some more culture – I had already booked tickets to Cats!