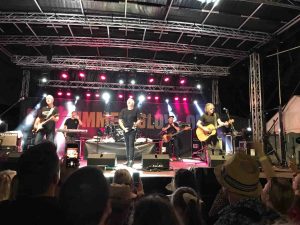 This year’s BLOWOUT will be just that – BIG! The popular event has already sold out of premium tickets – but don’t worry – act quickly and you can still secure a $99 entry to the February 27 event.

The Aussie hard rock band disbanded in 1996, and made a popular comeback in 2007.

Lead vocalist Suze DeMarchi has been described as an Aussie rock goddess.

Even though Baby Animals have grown up – they perform like their best known lyrics: “too young to know, too old to listen”.

It is no surprise to read that Run to Paradise was released when I was 18 – and even now, it takes me back to college ‘Cabarets’ – what we called discos. It explains why I want to drop everything when I hear it, and dance. Boys will be Boys, Never Gonna Die… I’m really looking forward to Choir Boys performing in Rainbow Beach.

Yes, they’re back – and I can’t wait to hear In the Summertime, Tommy and Krista, 20 Good Reasons, All My Life, Someday, Someday and fingers crossed they’ll play Homesick. I love that song! Please keep coming back to our little town.

Wow! A 50-year career for this singer songwriter, five Australian Top 10 singles during the late 1960s and early 1970s, just check out The Real Thing, Wings of an Eagle and Sweet Sweet Love! In 2015, Russell released ‘Red Dirt – Red Heart’, which won the coveted Best Blues And Roots Album at the 2016 ARIA Awards. Russell, we are very lucky to have you visit us!

One of the most popular acts last year (at least amongst my daughter’s mates) – Reece Mastin really puts on a performance and the songs! I didn’t realise how many I knew from this X-factor: ARIA No. 1 single Good Night,  Shut Up and Kiss Me, Rock$tar and Girls (All Around the World). Back in October Reece said of the Blowout: “Can”t tell you how excited I am at the thought of playing a festival again and this one was one of the best.”  Not to be missed.

This Sunshine Coast based singer/songwriter has found his place pulling on heartstrings and sharing his story through music. Oskar Campbell’s unmistakable sound is the inevitable product of his old school rock influences, infused with a love for modern folk, pop and soul music. Now establishing himself as a solo artist, he has notably supported reputable artists such as Xavier Rudd, Busby Marou and The Dreggs.

Held at the Rainbow Beach Sports Club, due to COVID-19 restrictions, tickets are non transferable.