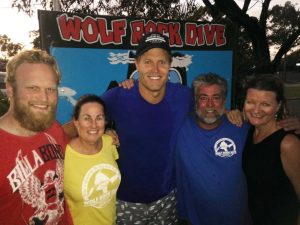 This past month we had the pleasure of taking Dr Chris Brown from The Living Room for a couple of dives.  We look forward to seeing this air later in the year.

Sharks, turtles, golden trevally, manta rays, gropers, nudibranchs, moray eels are just a few of the many, many different animals we have seen over the past month at Wolf Rock.

These animals either live permanently at Wolf Rock or like the manta rays are just passing through on their annual migration.  The names of each of these species also cover the many different variations we see such as moray eels.

By far the most common moray eel found at Wolf Rock is the white-eyed moray which we see all the time and it’s not unusual to see them in groups of 2 or 3.  But we occasionally we come across a white mouthed moray or a honeycomb moray which is a little more exciting.  Unfortunately, they are pretty shy creatures and unless you are lucky enough to catch them out and about you will only ever see the head poking up out of hole ready to defend themselves.

Visibility this month has been around 10 – 15 metres and water temperature 23-24 degrees.