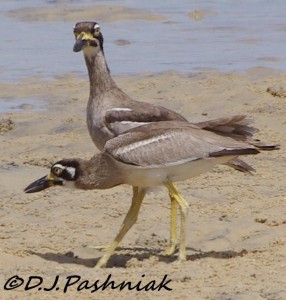 By now all the big flocks of migratory shorebirds have left for the northern hemisphere. The last big flock I saw was on March 16 and was a mixed flock of Grey-tailed Tattlers and Terek Sandpipers.

I had decided I should write about some of our Australian bush birds that stay around all year, but then I took some visitors out to Inskip Peninsular and saw a shorebird that I have not written about for some time, the Beach Stone-curlew (Esacus magnirostris).

Because there is a resident pair of Beach Stone-curlews at Inskip Point that I have seen over the past 11-plus years, it is easy to forget that they are not so common in other places.

In NSW this bird is listed as critically endangered with possibly as few as eight pairs in the state. These birds are found on the coast and adjacent rivers along the mid-north coast and the north coast.

They prefer an area where they are not disturbed by people or animals or beach traffic of any kind. This makes the pair at Inskip rather special, but it is also known that once the birds settle in an area they prefer to stay there.

This is a large thick-set shorebird with a length of about 50cms. It has a heavy-looking beak and thick knees. It is grey-brown in colour with a distinctive black and white pattern on its head and wings.

Like many of our resident shorebirds, its nest is just a scrape in the sand with usually only one egg.

Although I have frequently seen the birds at Inskip Point I have only once seen them with a juvenile bird. Of course, I am not always out at Inskip; so there could well have been other young birds that I have not seen.

If you want to join a shorebird count, phone Dorothy Pashniak: 54880057