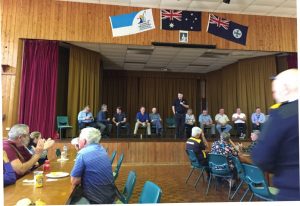 Tin Can Bay recently hosted a visit by the Blue Water Review Working Group which attracted Marine Rescue Volunteers from Hervey Bay to Caloundra. They were there to find out first-hand what lay ahead for the future of volunteer marine rescue organisations.

One year ago, the Queensland government set up an inquiry into marine rescue services in Queensland, led by retired navy Commodore Campbell Darby. He was tasked to review the existing two services provided by VMR Queensland and the Australian Volunteer Coastguard Association to determine whether they should be combined and if so, how they should be managed and funded.

A similar process was undertaken in NSW and recently marked a 10-year anniversary since the combining of three volunteers services into “Marine Rescue NSW”.

Both of the Queensland organisations have seen regulatory burdens by state and federal government increase, together with escalating costs of operation, which have been mostly being funded by community and corporate donations.

In addition, the average age of volunteers has been steadily increasing as new recruits were coming mainly from retired people.

Campbell Darby’s report was released last November and subsequently its recommendations, including the merger of the sector, have been considered by a body known as the Blue Water Working Group.

The group has representatives from both marine rescue services, and also has water police, Surf Life Saving, Ambulance, Maritime Safety Qld and Recreational Boating, appointed to advise the executives and Minister of the Department of Fire and Emergency Services. This working group has conducted meetings in city and regional areas.

The BWR meeting was held at the Community Centre in Tin Can Bay just prior to the release of a Strategic Plan they had agreed upon, called a Concept of Operations.

This document recommends to the Queensland Government that both marine rescue organisations be merged into a single service with a new name and branding, which will operate independently but under the umbrella of the Department of Fire and Emergency Services.

While the new organisation will not be fully funded by the Queensland Government, there will be a substantial increase in funding to offset rising costs such as insurance and replacement of vessels.

The Concept of Operations document will be followed in December by the release of a timetable for the planned changes to occur.

The Commander of Tin Can Bay Coast Guard, Mr John Macfarlane said that the end result may take several years before it is completed and that it was “business as usual” until it happens, but concedes that the financial burden of buying and operating a fleet of expensive vessels to commercial survey standards requires greater government support.

There are still many pieces of the puzzle to be decided, but he hopes that the extra funding will make it easier for the organisation to be always ready 365 days a year and be trained for a range of emergency responses.

Mr Macfarlane is confident that whatever the new organisation is called, a continuing service in Tin Can Bay is vital to safe boating in the area, and that the organisation will remain very closely attached to and supported by local residents, boaties and local business houses.

The Coast Guard at Tin Can Bay currently operates three vessels that perform a wide range of duties which is expected to expand with closer ties to the other Emergency Services.

Mr Macfarlane said that the costs of volunteer membership in marine rescue may be included in future funding by the State, a move which he hopes will attract more volunteers to the service, and that a recommended public education campaign by QFES will provide greater community recognition.

Despite the recommendations by the Working Group to date and the QFES, the final outcome is yet to be put by Minister Craig Crawford before State Cabinet for approval.