Kuzuzang-po-la – these are the welcoming words I receive from a young red robed monk as I enter the large Nyingma monastery in the central highlands of Bhutan. The young monk is only 16 years of age, but born in to the reincarnation of Jigme Khen Jatsho an important lama and respected teacher of tantric Buddhism in Bhutan. I am invited to attend evening prayer with over 30 monks, all of them reincarnated from previous spiritual leaders. This monks, the youngest only 6 years old must enrol for intense study in Sanskrit the traditional Buddhist writing, Dzongkha the official language of Bhutan, and English. Their main curriculum however comprises of 6 to 8 hours daily prayers in a very strict and well organised manner. As a rare visiting guest during prayer time I am privileged to receive a blessing from the most senior monk, but despite a promise for long life I am relieved to stretch my legs after just one hour of praying in my improper lotus position.

I came to Bhutan as a personal guest with the intention to do some trekking in this remote Himalayan Mountain Kingdom. Unlike most tourists I am not on a $250 a day pre-paid package tour.  My visit has been planned and organized solely by my host and friend Kelsee, a primary teacher from the capital Thimphu. The timing for my 17 day journey has been dictated by the winter holidays at my workplace, the Waterview Bistro in Rainbow Beach. I did not know my vacation would not correspond with the trekking season in the Himalayas due to unstable weather conditions and possible monsoon rain.

Immediately after landing on my Druk Air flight from Bangkok, my host made it clear I would experience more of a cultural tour rather than a sole trekking adventure. Firstly we had to agree on an itinerary. Individual tourism does not exist in Bhutan and a permit to visit the different regions is subject to immigration approval. Kelsee provided me with my own entourage consisting of a private vehicle including driver, a personal guide and a porter/helper. My own personal tour group had been created without an official travel agent.

My 17 day cultural tour took me from the west to the east over several high passes way above 3000 metres and included everything that amazing small nation had to offer.  Magnificent mountains, dense forest, delightful population, pure air, imposing architecture, exciting religion, superb art and all enclosed by a magical charm and a highly spiritual atmosphere. There are no beggars, few thefts, and little violence. Plastic bags are banned, billboards prohibited and the very sale of tabacco is illegal. Tuesday is an alcohol free dry day. Geographically the Kingdom lies secluded in the eastern Himalayas between India and Tibet, as big as Switzerland, but only sparsely inhabited with over 630 000 citizens. 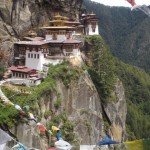 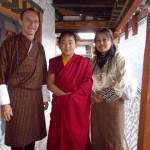 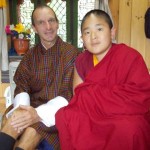 For the lucky few visitors, Bhutan is truly Shangri-la, the mysterious country hidden deep in the Himalayan Mountains. While the Bhutanese themselves are aware that they live in a privileged land surrounded by a world of economic and social problems, they also know that they are not living in a paradise. The hard life of the peasants consisting mainly of household chores, work in the fields and care of livestock, it is scarcely mechanized yet. With 65% of the population engaged in agriculture or rising livestock, Bhutan remains a rural country almost devoid of industry. The beauty of the pastoral landscape can seem unreal, like travelling back in time to a pre industrialized, medieval world.

The deepest impressions however, are the omnipresent symbols of Bhutan’s religion. The chortens (commemorative monuments) dotting the landscape, fluttering prayer flags, prayer wheels turned by the swift water of clear mountain streams, and of course the countless monasteries. Buddhism is everywhere, determining attitudes, moulding thoughts. Monks, high lamas, villagers, city folks, everybody is aware of the moral and spiritual influence on the population as a whole. Religion, tradition and ancestral custom is visual everywhere, the most obvious elements of all are respect for all religious institutions and the wearing of the national dress the artistically woven kira for women and the gho for men.

The Bhutanese do not reject their cultural and spiritual heritage in favour of modern imported values. Never having been colonized, always fiercely independent and proud of their traditions, they see no need to adopt ideas simply because they come from more developed and powerful countries. They accept only those concepts that help them to improve their way of life and develop their country within the framework of their way of life. They develop their country within their own traditions without destroying either the spirit or the environment. Uninhibited they continue to follow customs that many other countries would condemn as archaic. The Bhutanese have no desire for cultural assimilation. They are different and intend to remain so.

Conceived by the 4th King more than 30 years ago, Gross National Happiness serves as a beacon for Bhutan in its search for greater wellbeing and advancement of its people. Such an aspiration does not need to be of Bhutan alone. Increasingly international organisations like the UN, numerous NGO’s and individuals like myself getting inspiration and hope from GNH for an alternative to our GDP based model of economic growth comforting only our body while neglecting our mind and spirit. GNH is founded on the conviction that the purpose of development is happiness. It stresses that the legitimacy of a government must be tested on how well its policies and actions support this goal. It is based on the belief that the realization of happiness lies in the judicious balance between pursuing material and spiritual needs of the body and the mind. GNH offers a holistic paradigm within which the mind receives equal attention.

The royal government of Bhutan has now adopted a strategy referred as the four pillars of GNH:

A research institute (Centre for Bhutan Studies) has been commissioned to develop GNH indicators to bring the sublime, as it were, to the reality of the consumerist world. Indicators presently being developed comprise the following: living standards, population health, education, cultural vitality, time use and balance, emotional wellbeing, community vitality, eco system vitality and resilience, good governance.

On my last day I treat myself with a two hour hike up the steep slope of a mountain to visit the spectacular located Taktshang Lhakang monastery at an altitude of 2950 metres. The building clings to the black rock, overhanging the valley of Paro by 800 metres. The access path to the complex of temples is scarcely visible and makes its location all the more impressive. Taktshang, the “Tiger’s Nest”, gets its name from the story of its foundation. According to tradition in the eighth century, Guru Rimpoche came to Taktshang, flying on the back of a tigress. Guru Rimpoche meditated for three months in a cave and converted the Paro valley to Buddhism. Guru Rimpoche, the “Precious Master” is known here, as in Tibet as the founder of Tantric Buddhism and the second Buddah. He returned to Tibet to transmit his teachings to his disciples. Many Tibetan saints came after him to meditate in this intensely spiritual place and the first sanctuary to be built dates back to the 14th century.

I had no time to meditate for three months and no tigress carried me down to the valley. Nevertheless I took the wonderful opportunity to meditate just for a little while in this most amazing holy place and I cannot help but I felt just a little bit closer to heaven in this most earthy place. After all my journey to Bhutan brought me a little bit closer to happiness and to my inner peace. It is a long way for a short steep in the right direction, but it gives me hope for myself and mankind.