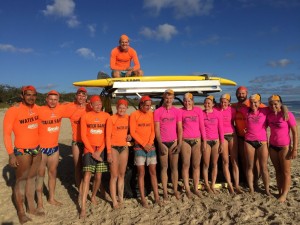 There were huge smiles for the presentation of the Bronze / SRC (Surf Rescue Certificate) Camp last month.

When asked how the week faired, “Fun” was how it was described.

This was hard to believe when the group undertook gruelling fitness work, run-swim-runs, wading, body bashes and more.

The intensive week saw six contenders and even more water safety crew using Rainbow Beach as the ultimate fitness destination, with sprints up the mini-blow and runs up to Carlo Sandblow in the mix.

Remembering “signals” was enhanced by penalty stair work, and there were evening lectures, but the whole experience included socialising, a celebratory dinner and a week off from normal family life and holiday jobs.

By Sunday, the whole group were successful in CPR and their board, tube and ‘spinal’ rescues.

At the presentation, instructor Shane Handy thanked parents for bringing their kids down, “They’re a lovely bunch of children – and were well behaved. We had magnificent conditions right up to the last day.”

Instructor Mark Lawler, agreed. “The best ever. One of the lifeguards was jealous – on his Bronze Camp it was 30 knot winds all week!”

In fact it was only the assessment day where the winds and sweep increased, which posed a challenge for the trainees.

After the group were awarded with their new uniform, families were treated to fantastic video of go-pro footage of the week.

“Four of them are already on patrol – the two newbies will start immediately, ” said Mark.

Mark continued, “There’s a first aid course in February and an IRB course coming up. We liked the Bronze course so much we’ll do it all again in September!”