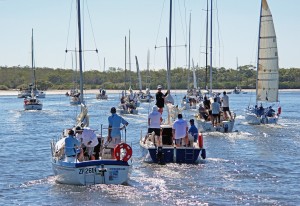 Photos and words by Julie Hartwig

The Bay to Bay Yacht Race may lack the glamour and prestige of the Sydney to Hobart and the Brisbane to Gladstone yacht races, but this iconic event holds its place on the Australian sailing calendar as one of the country’s biggest races for trailer yachts.

Organised by the Hervey Bay Sailing Club, the first race was held in 1981. Organisers expected 30 entries and were astonished when 114 boats turned up to race. The event went from strength to strength, with 1999 seeing a record entry of 230 boats, and while numbers have declined in recent years, the 2013 race still attracted over 140 entries. Principle Race Officer Colin Verrall expects a similar number of entries to face the starter’s gun for this year’s 34th Bay to Bay. 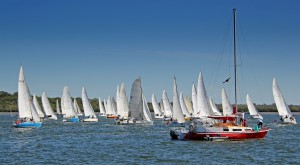 The Category 5 passage race is run over two days on a 90km course on the waters of the Great Sandy Strait between Tin Can Bay and Hervey Bay. For 2014, the fleet will be divided into five divisions for mixed fleet and class-based racing for all eligible classes of trailable boats. These include standard and sports monohulls (4 divisions), and standard and sports multihulls (1 division). All entries participate under various handicapping formulas that guarantee some exciting racing and close results.

The race weekend kicks off on Friday 3rd May with a pre-race function at the Tin Can Bay Yacht Club. The major spectacle unfolds on the waters of Tin Can Inlet when the fleet faces the starter’s gun from 11.00 on Saturday 4th May. The two-day race will again include an overnight stop at Garry’s Anchorage on Fraser Island before the second leg on Sunday 5th May, sees the fleet race north to Hervey Bay, finishing there during the afternoon. A major trophy presentation function will be held at the Hervey Bay Boat Club that evening. 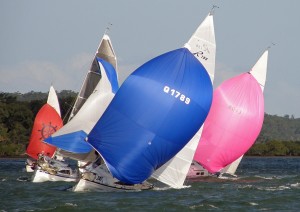 Heading for the finish at Garry’s Anchorage on Leg 1

Online race registration is available this year and entries close on 22nd April. Pre- and post-event marina berths are available at Tin Can Bay Star Marina and marinas in Urangan Boat Harbour. Bookings are essential. Alternatively, a designated anchoring area will be available in Snapper Creek in front of the Tin Can Bay Yacht Club. For more information, visit the Hervey Bay Sailing Club website at www.herveybaysailingclub.org.au.