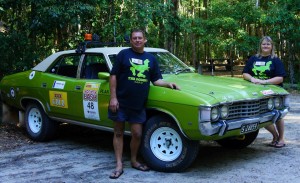 “The Dodgy’s” – Dean and Andrea Hayes with the 1976 ZG Ford Fairlane, prepare for their first Variety Bash together

This year marks the 25th Anniversary of the Variety Bash and two cars from Rainbow Beach will be entering the2014 XXXX Gold  “Cane Toads and Cockroaches” Qld Variety Bash.

August will see a massive congregation as other bashers from all states and territories of Australia will also be heading to Sydney. Variety – the Children’s Charity is a national not-for-profit organisation committed to empowering Australian children who are sick, disadvantaged or have special needs to live, laugh and learn.

Sam Mitchell from 7th Wave and his crew will once again be heading out for the bash in his car, and in addition, Rainbow Recovery aka “The Dodgy’s” will be entering a car for the first time.

The Dodgy’s Car 48, is a 1976 ZG Ford Fairlane which was purchased as a stand in car for Sam and his crew last year as his wasn’t quite finished in time for the Bash (it was in a million pieces in the Rainbow Recovery shed) and plan B – the 1942 Jeep they used in the previous year wasn’t an option that anyone wanted to travel in again!

This means that this year, since Sam’s will be finished for the journey, there was a spare bash car ready and waiting to go. Not wanting to pass up the opportunity, Dean and Andrea Hayes have committed to raising $8000 to enable them to participate in this year’s event.

Dean was  a crew member (and sometimes mechanic ) with Sam in the Fairlane last year and thoroughly enjoyed the whole experience, and this year his wife Andrea is going along for the ride.

“I will be celebrating my 40th in the lovely town of St George which is our second night on the run, with Dean, a couple of Rainbow locals and a few hundred strangers who by the end of the bash won’t be strangers anymore,” says Andrea.

Their itinerary takes them from take them from Queensland to NSW  via the non-conventional way: one night in Millmerran, St George, Wandilla Station, Bourke, Cobar, Narromine, Dubbo, Bathurst, then two nights in Sydney.

“Every stage between these towns is off the beaten track, mainly unsealed roads and usually visiting outback schools along the way. It may only be a short distance by the bitumen road, but the Bash organisers make sure it’s a long way by dirt!”

“I’m really looking forward to visiting these schools and seeing how Variety helps in the community. It’s also a great chance to meet heaps of people from such a diverse range of communities, both Bashers and others along the way.”

“Not mention how good it will be to finish each long dusty day with a lovely cool ale (XXXX Gold of course)!  I also think that Dean and I, even though we have been together for 21 years, will learn a few new things about each other, which could be scary!”

The $8000 raised goes directly to Variety, with the entrants having to cover their entry fee, and personal expenses like fuel, accommodation and meals out of their own pockets.

As can be seen in the photo, the car has a lot of spaces which don’t have stickers.  Anyone who donates over $100 to their fundraising efforts – whether they are a business or individual – is eligible have their name or business logo put on the car. They would love to have as many Rainbow Beach businesses donate as possible so they can take your business with them to Sydney.

Donations can be made directly to either of them or via their everyday hero page https://2014bash.everydayhero.com/au/the-dodgy-car-48 where you can also keep track of their fundraising efforts and keep up to date on what Car 48 is up to.