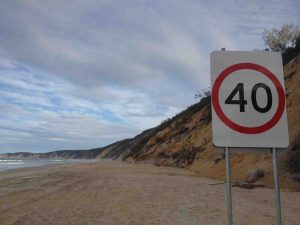 Last month’s police article regarding Teewah Beach certainly created a stir and plenty of discussion – with many solutions put forward and opinions offered. And – while I didn’t write the article – I certainly agree with Mick’s assertion that the problem is related to driver attitude.

Since the fatal traffic crash on Teewah in late August, police have spent countless hours patrolling the 20 kilometre stretch of sand south of Double Island Point. Yet, less than two weeks after the fatal, I was patrolling the camping zone on Teewah Beach and came across a ‘P’ plate driver executing a series of fishtails – while travelling at 90km/h.

After questioning this young bloke for a couple of minutes, I gathered two pieces of information that support my ‘driver attitude is the problem’ hypothesis. Firstly, this bloke’s driver’s licence was subject to a Good Driving Behaviour (GDB) option.

Now for all you good driver’s out there – who probably have no idea what this means – a GDB option is offered to a ‘P’, ‘P1’ or ‘P2’ type licence holder who has accumulated four or more demerit points within a one-year period.

Now, given that travelling at 40km/h above the speed limit attracts six demerit points, I can only assume this driver didn’t really care about his licence. He certainly wasn’t displaying ‘Good Driving Behaviour’.

The second piece of information inadvertently came from the driver’s 14-year-old passenger, who let it slip that they all knew the young man tragically killed in the recent rollover (the same accident that occurred close to the spot we were standing).

Now, I haven’t witnessed anything that stupid since my days in Rockhampton, where the local hoons thought they would honour the memory of their young mate (who died after crashing his car while hooning) by performing donuts on the main road outside the chapel during his funeral service…

After recovering from the shock of this revelation, I issued the driver two tickets for his efforts. As I was driving away, I wondered how long this attitude adjustment would last.

The very next day I was called to a traffic crash on Queen Elizabeth Drive in Cooloola Cove involving a ‘P1’ licence holder who had lost control of his vehicle after turning off Rainbow Beach Road and had run into another vehicle, which was pulled over on the side of the road.

The young bloke with the ‘P1’ licence told me he turned the corner a bit fast and lost control. “It was an accident,” he said.

Well, it turns out the story goes more like this. The young driver, who obtained his provisional licence eight (8) days earlier, left Rainbow Beach and was on his way home to Tin Can Bay at warp speed.

He came across a line of ten cars and decided to overtake them all. His plan started to come unstuck when he saw a car coming the other way.

Undeterred, this bloke forced his way back onto the correct side of the road, before tailgating the car in front of him all the way to the intersection.

After turning the corner, he hit the accelerator, fishtailing onto the wrong side of the road, losing control and punting a small sedan about 10 metres off the road.

Long story short, the whole incident was witnessed by an off-duty policeman on his way home from Fraser Island – so the young bloke’s car ended up on the back of a tow truck and he won’t see it again for 90 days.

Another young driver’s attitude adjusted – but for how long?

Although the focus of this article is young drivers, all road users should display the right attitude when getting behind the wheel. As I’ve said plenty of times before – driving a car is one of the most dangerous activities we undertake every day. Starting with the right attitude is just common sense!

While researching this article I browsed the Queensland Transport website where I found a section under the heading of ‘Safety’ titled “Attitude is everything”. Pretty much sums it up!