Brushes by the Sea Results for 2015

2015 was the year of the children’s entries for “Brushes by the Sea” – with a record 89 entries. It was fitting as the monies raised at the event were for the Stephanie Alexander Kitchen Garden Project at Rainbow Beach State School.

After organising the event each year, Peggy Phelan is handing over the co-ordination to the Sports Club. She says it was a lot of fun organising over the years, and watching local artist’s work develop.

Peggy admits, “I have to say the section that I love the most is the young artist – looking at life through the eyes of children.”

Another 188 entries into the other sections meant there was plenty to admire at the event, held at the long weekend. Volunteers welcomed over 600 people through the festival over the three days, including Acting Mayor Rae Gate and Councillor Julie Walker.

Judges included Noosa artist, Tricia Bradford, President of the Gympie Photography Club, Ian Smith and Margaret Sanderson from Gympie Patchwork. Judges had a difficult time deciding on the winners with the impressive creations on display.

The P&C goose raffle included an impressive 28 prizes, that generated over $600 – well done to the students who helped. P&C Secretary, Kirstie Jordison may have started off a new career with her very successful auction – raising $720 just from a houseboat holiday thanks to Tin Can Bay Houseboats.

Peggy thanked everyone for their participation and support, especially the judges, volunteers and sponsors, including Cafe Jilarty who provided all the encouragement awards.

“Our Art Sales this year were $1525 – a good result and with all the entries, door takings, commission and Hayley McFarlane’s Mystery Painting added to the raffle and auction, the overall total for festival was over $3000.”

It was due to Peggy’s and the Sport Club’s collaboration with the school that so many children participated. The funds raised are a fantastic start for the new P&C committee and the Kitchen Garden for 2015. 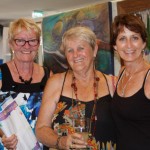 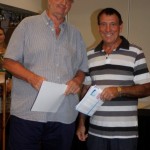 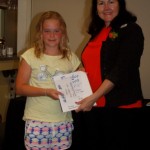 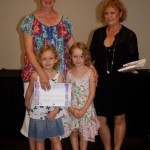 Barbara Fea’s excitement with her two awards was exceeded by her granddaughters! Gallery Jilarty’s Leonie Kent presents her with the Encouragement Award for watercolour, and they were thrilled for Grandma when she also won the coveted Our Local Area section 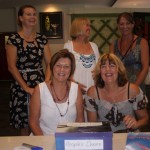 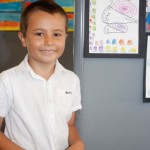 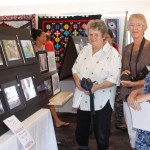 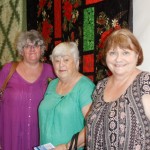 Kerri Southern, who won two encouragement awards for Landscape Photography and Oils, catches up with Lyn Barrett and Cherie Mason 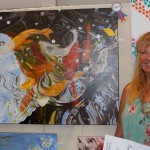 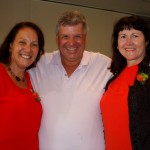 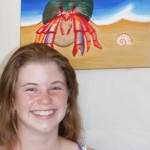