Home  »  Environment • Featured   »   Are local livelihoods and lifestyles on the line? Have your say in the Great Sandy Marine Park Plan 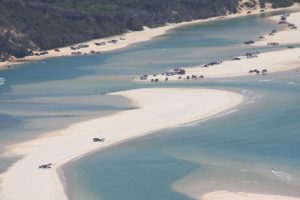 Double Island Point is the southernmost tip of the Great Sandy Marine Park and includes the Great Sandy Straits – make sure you say how to want to help conservation, keep jobs or play in our backyard Image taken whilst on board Rainbow Beach Helicopters

If you like to play in the Sandy Straits or head down to our beautiful Double Island Point, then have your say, so you can continue to do so!

Boaties, fishers and users of the Great Sandy Marine Park are invited to take part in a review of the park’s zoning plan to help guide its future management.

Local MP, Tony Perrett, urges everyone to comment, “It is important that everyone make a submission, no matter how brief, as this type of plan will affect local businesses, tourism, fishing, boating and recreational activities in the region.

“The Minister has advised me that the management framework ‘aims to balance conservation with sustainable use within the Great Sandy Marine Park.’

“I hope that this is not code for closing down legitimate and sensible activities within the region.”

Noosa MP, Sandy Bolton reports on her website that the Great Sandy Straits Management Plan is one of the strategies that will be utilised by the ‘Teewah and Cooloola Working Group’.

At the group based in Noosa, stakeholders discuss impacts, visitation numbers and types, future projections, infrastructure, fees, permits and facilities. Recommendations from the group will be funnelled to various departments and documents.

Although the working group has a representative from Rainbow Beach Commerce and Tourism, Gympie Council and our local MP, the group is top heavy with Noosa locals, bureaucrats and groups, and agendas are not always clear.

Items mentioned for discussion on our regions:

The Great Sandy Marine Park was established in 2006 and protects an area of approximately 6,000km2 along the Bundaberg–Fraser Coast, from Baffle Creek in the north to Double Island Point in the south. It includes Hervey Bay, the Great Sandy Strait and offshore waters to 3 nautical miles.

“The current zoning plan is now 13 years old and it’s time it had a comprehensive review,” Minister Crawford said.

“The park is important to tourism and for recreational and commercial fishing and it’s a much-loved natural asset for locals, and a popular destination for Australian and international visitors.”

Leeanne Enoch MP Minister for Environment and the Great Barrier Reef, Minister for Science and Minister for the Arts advised that, “Continual improvement of the marine park’s management is increasingly important in the face of a changing climate, increased usage and the community’s desire for better protection of the values that make the Great Sandy Marine Park such an amazing place.”

The report says comments received from the public and stakeholders since the marine park was declared in 2006, suggest that enhancements to its management may be achieved through actions that further:

Responses to the survey and other submissions will be used to prepare a draft revised zoning plan which will be subject to further consultation in 2019.

The discussion paper and background information are available at www.qld.gov.au/marineparks.  Provide feedback via the online survey at