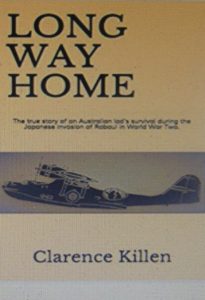 Anzac Day is a national day that commemorates all Australians and New Zealanders who served and died in all wars, conflicts and peacekeeping operations.

Remembrances and stories are shared so that our present and future generations have an everlasting understanding of the suffering that our countrymen and women endured during war.

Long Way Home is a truly moving story written in 1993 by Clarence (Tal) Killen (deceased) after being unable to tell his story to his family for fifty years due to feelings of guilt and emotion.  Tal and his wife, Madge resided at Neerdie for many years.  Madge now lives at Tin Can Bay with her son, Tim and his wife, Cheryl.

Inspired by relatives and close friends, Tal’s family decided to publish his story.

The story is a factual account of the author’s experiences endured when the WW2 conflict with the Japanese occurred in Rabaul, New Britain in January 1942.  The author was a sixteen-year-old Australian boy who took the amazing opportunity to visit his long-time pen-friend in a village near Rabaul.  Tal was supposed to return home to Australia on the same ship he arrived at Rabaul on – this did not happen.  Unbeknownst to Tal and his friend’s family, the Japanese were preparing an invasion of Rabaul.  The Australian army was unable to help Tal return to Australia and he was enlisted into the 2/22nd Battalion.  His story from that point is all about survival!  His story graphically describes the horrific encounters witnessed and decisions made during his overwhelming need to stay alive.

The story is written in third person so it may be seen through the reader’s eyes.  His story is incredible and leaves the reader bewildered and sad that such happenings occurred!

Tal’s story, along with so many other war stories, need to be available for all to read so that the scars and life-long pain that these authors and their families suffered can be understood.

A reader commented that he “felt privileged to be allowed to read Tal’s story”.

With encouragement and help from friends, Tal’s story is successfully published and is available on Amazon.com.au as an e-Book or a paperback.