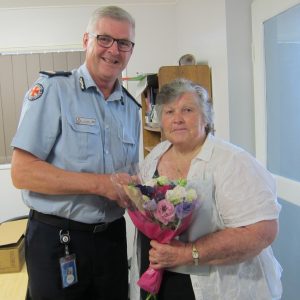 Lillian Clark being presented with her 40 years of service medal by Acting Assistant Commissioner, Ian Tar

Some members of the Local Ambulance Committee (LAC) and the Benefits Sub-committee were acknowledged recently for the years of service they have given to the committees. The ceremony was held at the Tin Can Bay Ambulance Station with Acting Assistant Commissioner Ian Tar representing the Queensland Ambulance Service (QAS).

Ian praised the work done by LACs across Queensland in supporting the QAS and was particularly impressed with the length of service some of our local committee members have notched up.

Each person was presented with a Certificate of Appreciation and a QAS service medal for the dedication they have shown and the effort they have made to support the local ambulance stations.

There are more than 180 Local Ambulance Committees in Queensland and they play a vital role in providing feedback and advice to the QAS about service delivery. They also promote ambulance services in the community and raise funds for service enhancement. So it was a great honour for our local LAC to be recognised for the years of support our members have provided both to the QAS and the community.

In last month’s article, the issue of street numbering in Rainbow Beach was raised. Unfortunately the information provided by Gympie Council that reflective street numbers are available free of charge was incorrect.

We have since learned that free numbers are only given out to landowners as part of new housing developments or where Council is rolling out new services, e.g. waste collection.

The reflective house numbers can be purchased by existing property owners from Council for a fee of $10. Of course, hardware stores and some novelty shops also carry a range of house numbers. We apologise if anyone has been inconvenienced by our initial advice.