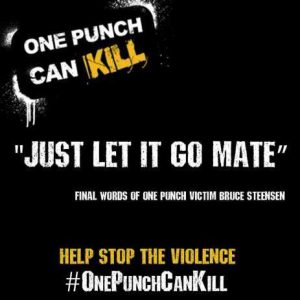 A few weeks ago I spent a couple of days sitting at the Gympie District Court waiting to give evidence in the ‘Unlawful Wounding’ trial of a former Rainbow Beach lifeguard.

The incident- which occurred in May 2015 – involved three local, drunken offenders who decided to go car shopping late one evening. Instead of bringing money, these men thought it would be more appropriate to bring along weapons, including a pitchfork, a shovel and a knife (you may remember this from a previous police article).

As I sat outside the courtroom for hour after hour I began thinking about all the serious, violent incidents that I have been called to while stationed in Rainbow Beach.

I thought about a violent domestic where the victim had his head split open after his female partner clubbed him with a piece of wood. I thought about a street disturbance involving a local man who jumped out of a moving vehicle to confront another male, before being seriously assaulted himself.  I thought about a man who had his eye socket fractured following a disagreement at the pub, and unfortunately the list went on and on.

The longer I sat thinking, the more obvious it became to me that nearly all these incidents had a common theme – drug abuse and physical injury. Now when I say ‘drugs’ you’re probably thinking about cannabis or ‘ICE’ which have been given plenty of media attention recently. But no, I’m talking about the drug that’s legal for anyone aged 18-years-old or older – alcohol!

Yes, alcohol abuse was a contributing factor in all of the incidents I mentioned above, and in the vast majority of the serious jobs I have attended. What I also find disturbing is that a local is usually the culprit.

Only last weekend (at the time of writing) two local blokes took offence to being told that the pub was closing. Instead of calling it a night and heading home, they decided to argue with security staff, resulting in a scuffle on the hotel floor and one of the locals ‘coward punching’ a security guard in the back of the head a couple of times.

The Queensland Government continues to introduce measures aimed at reducing alcohol-fuelled violence, including legislative changes and policing initiatives. I won’t bore you with the details here because ultimately – like most things – nothing will change or improve until the attitudes of those attending licensed premises change.

Please do not resort to violence. Remember, one punch can kill, it has, and will continue to do so. If you feel aggrieved by something that has happened, follow the correct channels to lodge your complaint, and let us do our job. Assault can steal your future and that of your victim.

It takes courage to walk away – It’s definitely not cowardly and it could save everyone a lot of pain and suffering.