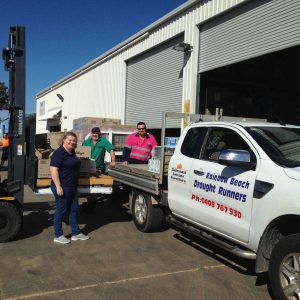 As I mentioned last month, we are trying to take it easy for the next couple of months as we re-evaluate the main areas in need of our supplies.

We are still receiving donations but trying to deliver mainly vouchers instead of food till our next run in early December.

This month I took a big load of food hampers (65) ,1200 rolls of toilet paper, washing detergents, and many other boxes of food to the Drought Angels in Chinchilla. These were being urgently delivered to those mainly suffering from the mouse plague.

Early in the month $1000 went out in vouchers to the Drought Angels and $500 to Fencing for Fires for materials in NE Victoria.

Thank you again to Leena & Steve, Helen George and other donors at our drop point near Woolies at the Real Estate.

This year we are doing a BIG drive for Xmas cakes or puddings to go out west as well as Ttys.

I have ordered 20 Lions Xmas cakes and will make 10 or 15 to start the ball rolling.

If anyone can help please get in touch.